Jay Slater pulls on his ushanka and gets to grips with this strangely odd release from G&G.

It is the world’s largest country and covers one-seventh of the earth’s land area; Hitler did not take that into account when the Third Reich launched Operation Barbarossa; and Adolf and his Nazi pals were soon dead when they discovered to their horror that the motherland is larger than Pluto.

As well as beetroot, caviar and dash cams that record death and destruction on the roads, it is a country that is abundant in online pornography; one can presume that everyone is at it. There are more than nine million women than men. Russia and “the great evil” that is the USA are only 4 km apart at the nearest point and the holiday season is usually marked by a week-long binge with the average citizen spending over £400 on booze. Unsurprisingly, some 23,000 people die of alcohol poisoning each year and happy juice-related assaults, suicides and murders are among the highest in the world. The average life expectancy of a male is only sixty-three years. Laika was the first dog in space, albeit a dead pooch and vodka comes from the Russian word “voda”, which translates as water – 25 per cent of all Russians die due to vodka abuse before reaching fifty-five. When Stallone’s Rambo: First Blood II was released in 1985, Russia followed suit the same year with The Detached Mission/Odinochnoye plavanye – it is a pig’s ear of a movie. With the phrase “The church is near but the road is icy; the tavern is far but I will walk carefully,” beer was not considered as an alcoholic beverage until 2013. How we love Russia for its many careless vices.

History lesson over, which brings us to the G&G VSS Vintorez, a subsonic 9-mm supressed sniper rifle favoured by Soviet Special Forces. Intended to replace some AK-47 rifles, the VSS, better known to you and me as the Vinovka Snaiperskaja Spetsialnaya, was designed for crack troops, the MVD and KGB. Its round can penetrate body armour at some 1,300 feet and has been in use since the late 1980s and is favoured for its compact size and capability to ruin good looks.

G&G has been on a roll recently with well-designed and packaged weapons, which are accurate, made to last and are, for many at £330 or so, affordable (with that being said, ICS’s M1 Garand gives the G&G equivalent a howling roundhouse kick to the cojones). It is a compact and tidy presentation. The gun comes in two parts – the front-end silencer and wooden stock that is easy to detach for transport purposes – and is initially impressive. It also comes with two dedicated batteries, Li-Po charger, a lead to allow the use of large stick batteries and the usual paraphernalia to be expected such as BBs and what not. It feels just right and assuring in the hand, the huge and weighty silencer adding menace to the package as well as mechanised grooves to assist grip.

The battery compartment is generous. To gain access, simply twist the bottom ring of the silencer housing until it becomes loose. It is detached from the main body to reveal a 330-mm inner barrel of elegant quality and the battery connection. Care is to be maintained as the barrel can be easily damaged however and this includes rehousing the silencer to the platform. What is noticeable is how large the internal compartment is and this VSS bad boy can hold large stick batteries with ease.
Access to the hop-up is another breeze; located in the right-hand side of the rifle, the charging handle reveals the hop and away you go: couldn’t be simpler. 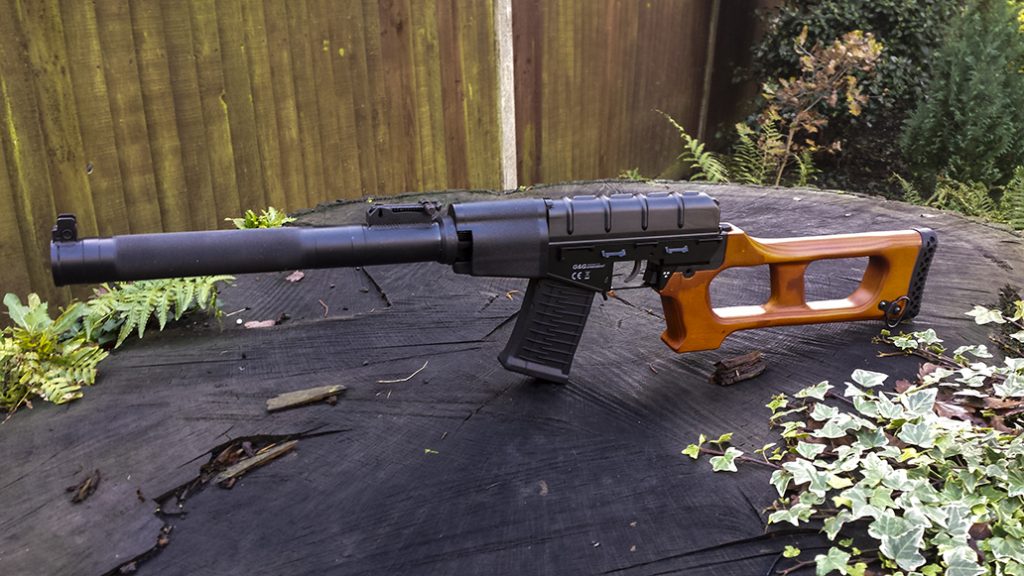 The wooden stock is beautiful in terms of quality and this VSS certainly looks the part. The mid-cap magazine slots into the well just like an AK-47 – the front part of the magazine feeds first into the well – and you are ready to rock ’n’ roll. The plastic magazine reeks of top quality and is easy to wind, even with the nimblest of fingers and those resembling pork sausages. It is solid, feels great, weight is well distributed as a firing platform and aesthetically, she looks a work of cordite art; however, looks can be deceiving. And they are.

Just like an Alfa Romeo Alfasud from the early 1980s, the G&G VSS looks the part but fails to deliver. It is an electronic nightmare that is over-designed, ridiculous and stupid. In the magazine well a switch allows an inspection/test mode for dry firing and semi- and full-auto use as well as correcting the position of the gears. Also, it has a quick change spring, easy access gearbox, a charging handle to imitate the real steel and its artificial intelligence can work out to the last BB as to what is fed in the magazine. On paper, it sounds great; however, this suddenly looks over-complex and over-egging the pudding. In short, how we hated it. The G&G VSS is junk.

The G & G VSS was tested with .20 and .25 MadBull BBs at a target range of 200 feet. The stock battery was fully charged as was a normal stick battery and on both occasions, a blue light in the magazine well indicated that the gun was ready to be put through her paces. So far, so good but it took an hour or so to get the VSS to work! This is not rocket science: a fully loaded magazine is inserted into the rifle, the safety is selected as “live” and you’re ready to rumble. Although the blue light indicated power, there was nothing: nada, zilch, zip! And then she blossomed into life, letting rip with anger and hell-bent fury. She fed flawlessly and range and consistency were impressive and as to be expected from a midrange shooter, although ammo did flow upwards towards their final arc, however that could be an issue with the hop-up needing bedding-in, which was to be expected and .25s helped. On first inspections, the G&G VSS showed promise in holding its own on the airsoft killing grounds as a decent AEG.

Despite this, it then went (for want for a better phrase) tits up! 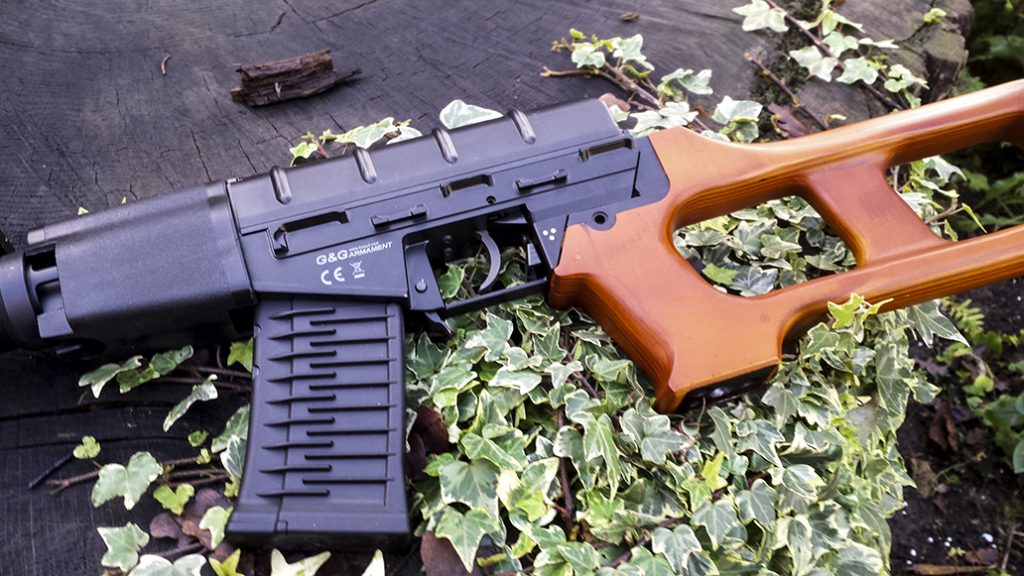 Both batteries were fully charged later in the week for another test and this is where it became infuriating. Although the blue power light suggested that there was power and the gun was live, it failed to fire. Batteries were changed, buttons were pressed and heads were scratched. Despite its fancy and futuristic electronic interior and razzle-dazzle allure, the G&G VSS was having none of it. Thereafter, it refused to work. The blue light shone bright, there was power and no joy: nothing. A week later, it worked fine and with no issues. A day later, it was having none of it – dead as a Dodo. The VSS was then placed back into its box, shelved and forgotten about, unloved and uncared for.

At some £150 cheaper or more, the ASG Sten Mk. 2 and its brethren, which are not inflicted by insane hardcore electronics, perform far better, are more reliable and more importantly, do their job for being simply engineered. Or as some would say: not at all bad for a budget China clone.

This VSS is a temperamental wild child. Despite its eyeball candy, visual allure and solid weight, it is unreliable and far less satisfactory than many low-budget entry weapons into the sport. Unless the version that Action Airsoft was sent to review suffered from technical bugbears – which can and does happen on the rare occasion (but we refuse to gloss over such facts and lie to our readers) – do we really recommend the G&G VSS? “Niet!” is the honest answer and Comrade Stalin would not be a happy bunny.