While nearly every conceivable sidearm and machine pistol is readily available for the NATO special forces types out there, Eastern Bloc players have until recently been poorly served – but the ASG Scorpion is happy to redress this imbalance.

For the purpose of this review I’ll use the English spelling of the word “Scorpion” as while the real steel item is often called a “Skorpion”, ASG have chosen to use the UK nomenclature on their packaging.

I’ve recently taken to “casual” sniping with my Dragunov and, quite rightly so, most sites specify that snipers need a sidearm and have a minimum engagement range. I’m not fan of gas pistols and with most AEPs and Machine pistols being Glocks, MP7s and MP5Ks they jarred a little bit with my loadout. One or two Scorpions have been out for a while… but not one at such great value.
I have to admit to being sceptical of cheap AEPs. My first ever NBB TM 1911 back in the ‘90s was an embarrassing affair and I’d have been better off spitting BBs at the other side, rather than shooting at them with it! Even a recent “cheapsoft” 1911 (a Glock in an oversized 1911 body if truth be told) left me high and dry after a promising start, by simply breaking apart mid game. So with my confidence rocked a little by past experience I expected little from ASG’s offer, which retails at under £90 for the complete Vz.61

Scorpion package but, for once I’m pleased to say my expectations were well and truly dashed.

Before looking at the AEP/AEG itself (the Scorpion really does walk the line between the two) let’s look a little at the real beast from the East.

In the early 1960s the Czech government realised it needed a short compact machine pistol for its Security Troops, Special Forces and Paratrooper Battalions. Their chosen weapon was designed by renowned Czech arms manufacturer Česká zbrojovka (Cz.) in 1961 and given the slightly uninspiring official designation “sub machine gun model 1961” or Samopal vzor 61.

Chambered for 7.65mm as standard, with NATO and Soviet 9mm variants, this SMG used a clever telescopic bolt to keep the overall dimensions of the weapon to a minimum and, as the weapon is so light, special devices deliberately reduce inertia and rate of fire to keep the weapon controllable on fully automatic. With its cyclic rate still at around 850rpm, a rudimentary stock is fitted to aid full auto fire and is used in an unusual way – by clamping the stock under the arm, between arm and body, rather than bracing it into the shoulder.

So how does the airsoft model hold up? Surprisingly well, actually. 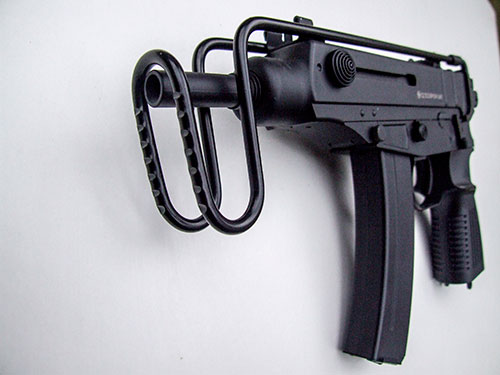 First off bear this in mind and keep it fixed in mind: The whole package retails for as little as £85 in the UK. For that you get the machine pistol itself, a “long” magazine (more about this later), a 20mm bolt on RIS rail adaptor, a silencer adaptor, a battery and charging pack and of course the obligatory small bag of 200 or so BBs! So, as you can see, you already feel like you’ve got a bargain before you even fire it up.

Danish distribution company, ActionSportGames (ASG), have consistently impressed us at Airsoft Action. We loved their AS58 FAL variant reviewed in our February issue and it’s great to see that once again they’ve put out a quality product at a knock down price.

While the battery was charging I got to grips with the machine pistol itself and while (as you’d expect at the price) it’s not full metal, it almost feels as if it is with quite a few substantial metal parts including the stock and, as you’ll nearly always have this folded over the body of the gun, it adds to the rigidity and solid feel. If you’re like me and tend to bypass the enclosed manual until you find a problem, the stock mechanism is an enigma in itself but after a while I realised that gently squeezing it apart over the fore sight allowed it to be solidly locked into the rear position and, after almost as long trying to figure out how to get it back again, I realised the stock release also worked on squeezing the parallel bars together!

Externally the gun is well finished as you would expect from a licenced reproduction, the Cz. Factory have put their name to this and as a “Cold War” fan with a bit of a love for the Scorpion, I can see why they would be happy to. The fire selector, with its “Soviet style” settings of “give it loads”, “off” and “single” (seemingly there as an afterthought) is easy to use but not as smooth as I’d have liked, but the magazine release however is simple and works beautifully every time. Nearly all the controls and catches are on the left face of the weapon (as with the real one), which might normally be annoying to “lefty” shooters, but the bonus is that with the small size of the gun you can reach the mag release with your index finger shooting left handed! 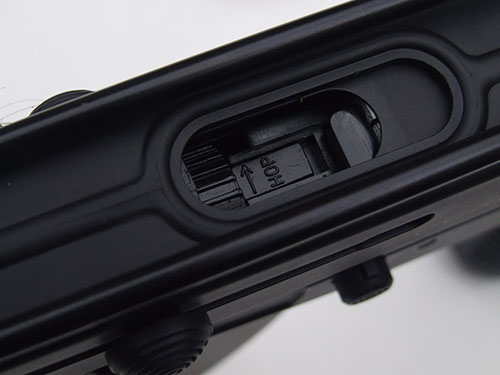 The fake, sprung cocking mechanism reveals the hop mechanism with a rotary ring hop, visually similar to that found on AEGs like the TM G36 and Thompson and helpfully a little arrow is provided to tell you which way is “put more hop on”. The battery fits within the pistol grip and once you get used to it fits in quickly and securely, but a little trial and error was needed on my part (once again I implore you to read the manual before playing with it!).

As aforementioned, included in the packages are a silencer/tracer unit adaptor and, for the more modern player, a bolt-on plastic short 20mm rail. Given the high quality of all the other plastic parts that look very “metal” the rail is somewhat disappointingly cheap and glossy-looking but hey, if you’re the sort of person who wants to “rail up” a classic machine pistol, then you probably don’t mind how things look anyway.

The magazine, however, felt like something of a weak spot in the whole package to me. Firstly while it’s great to include the longer of the Scorpion’s magazine type, it seems utterly pointless to have made it a “high cap” wind-on mechanism when capacity is about 60 rounds. I would have much preferred to have had a smaller capacity magazine (say around 40) that utilised a sprung midcap/realcap mechanism. My second bugbear with the magazine only really applies to those of you wanting to use the Scorpion with “historical” loadouts: With the long magazine fitted the machine pistol won’t fit in any of the military pattern holsters made for it (most Czech holsters for the Vz61 are oversized brown leather affairs) and so to holster it you will have to remove the mag, making it slightly less useful as a short notice sniping back up. When you’re “bumped” by someone too close to take a shot with your main weapon, you just don’t have time to faff around slapping mags in! But that’s a minor quibble… 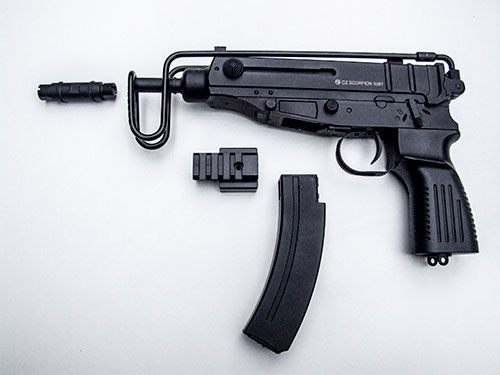 The whole boxed set also included a bright orange safety muzzle cap as well as the screws and allen keys needed to put on the optional accessories, which is a nice touch as I’m forever loosing small items like allen keys and you can see that AEG had quite honestly put everything you need to start using the Vz.61 straight out of the box in the box. (Oh and there was a manual which I got around to reading eventually, which was surprisingly well written and readable, by airsoft ‘Engrish’ standards.)

All in all a tidy little package, in every respect! But how does it shoot? After the battery had charged I gave it a short test fire using both the supplied BB at .20 and some .25 Blasters. For a start (and I pretty much knew this), don’t bother putting .25s in it. The hop really didn’t like them and the modest FPS of around 275FPS dropped considerably. With .20s in it was a better story. You’re not going to be duking out with gas pistols or primary AEGs at any great range but for CQB, or as a backup for woodland it’s pretty nifty! Single shots were snappy and consistent, full auto bursts were equally good with very few “flyers” launching off on weird hop-based trajectories. Rate of fire is somewhat low but, hey you don’t WANT it to be that high with a 60 round magazine!

I managed to burn through about five magazines before the battery gave out so if you’re planning on using the Vz.61 as anything other than a “last chance” back up, investing in some spare batteries is a must!

So whether you want to be a CQB ninja or an Eastern Bloc operative this could be the baby for you… Of course you just might be in the market for an excellent, incredibly well priced compact machine pistol and in that case… this baby is for you too!