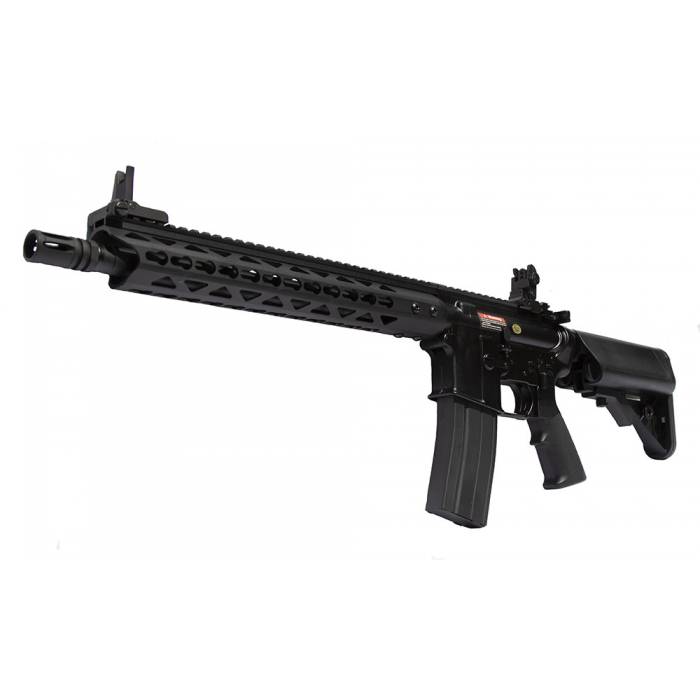 It has to be said that we’ve had some pretty great experiences with AEGs from S&T Airsoft, especially some of their historical models like the Sterling – and we love their springer shotguns!

However, Red Cell is starting to delve into a test group of GBB rifles and Carbines for one of their big reports a little later this year, and has begun to put a number of premium brand models through the mill. It has, however, opened a debate amongst the team in relation to the role of GBBRs in general airsoft skirmishing. Bill will be looking at this specifically in Issue 130, whilst Jimmy makes the case for the not-so-humble AEG.

Generally speaking, there seem to be a few “accepted” issues with gas-driven rifle and carbine platforms in a more temperate environment, the first being gas efficiency in extreme temperatures, the second being overall performance and the third being the price both of the platform itself and then for magazines! We’ll address each of those issues in time but, for now, we’ll address point 3 …and that’s price.

Although most of the models in test DO have a hefty initial price tag, there’s a couple that we’ve been looking at that sit firmly in the reach of most players and the first of these is the KEYMOD 13 from S&T!

S&T (as you may already know) was founded in 2009 with their HQ office located in Hong Kong, a subsidiary office in Japan, as well as Airsoft/Airgun manufacturing facilities in China. In the USA you’ll often find their products listed as “MATRIX” and, as such, they have a wider following than you might think!

The KEYMOD 13 though sells for well under UK£200 and offers many of the benefits of more expensive gas models! It makes use of the tried and tested Western Arms gas blowback system, ensuring reliable performance with a plethora of aftermarket parts and accessories (one of the team still has an original WA AR that’s been upgraded and still runs like a train!), but with injection moulded polymer receivers. These provide solid durability without the additional weight of a metal receiver and, let’s face it, there’s a whole heap of real polymer-bodied firearms out there these days so this is by no means a deal-breaker for us, particularly as S&T tell us that the system now offers improved gas efficiency, reliable feeding and firing in full auto!

All the things that you need are included, such as an adjustable CRANE-type stock, a flat top receiver ideal for mounting optics and a rather tasty 13-inch (other lengths are available) tip-railed, Keymod-compatible handguard, with Keymod mounting points at the 3 o’clock, 6 o’clock, and 9 o’clock positions. Along with all of this you get “BUIS” fitted as standard and a 50BB gas magazine. We understand that Matrix, G&P, Western Arms, King Arms and Inokatsu, along with S&T’s own magazines, are compatible – although, in fairness, all of these are still about the same price as any other gas mag out there.

We’re certainly liking the look of this as a more “budget friendly” entry model to the GBBR world but, of course, we’ll run it through the full gamut of testing before we make it a recommendation.

Will it make the “Red Cell Cut”? You’ll have to wait and see!