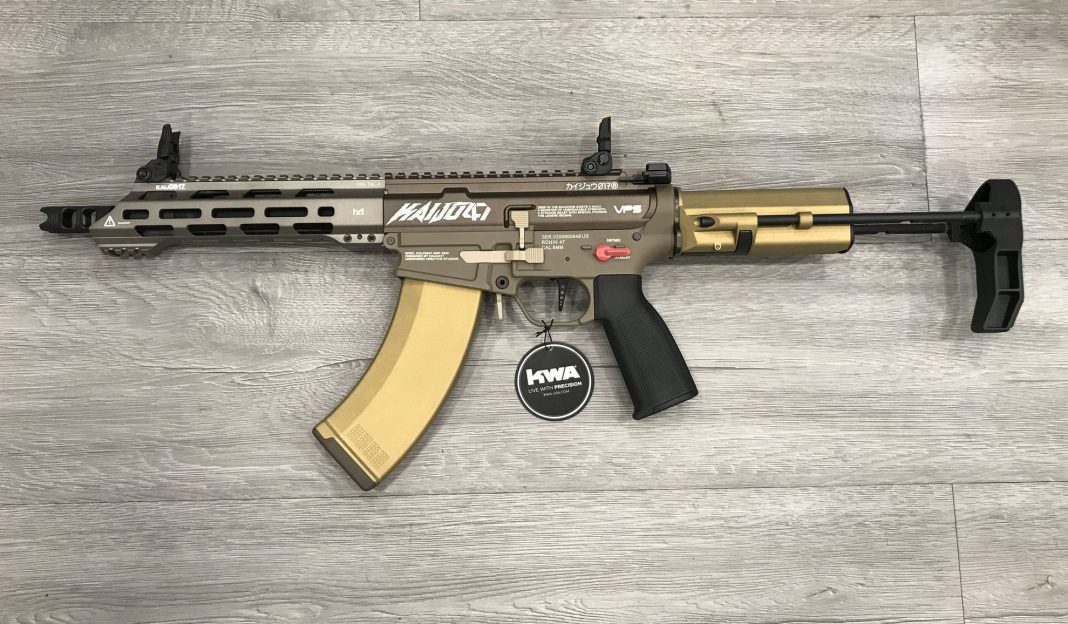 Back in Issue 119 Boycie took a first look at the stunning RN47 Ronin and amongst his comments were:

“I took the rifle with me … to do some outdoor tests and to see what players thought of the new AEG. The main comment was that of how solid the rifle felt in their hands, but that was until one guy ran a magazine full through the RN47. “WOW! That’s some range on it, what have you done to it?” to which I replied, nothing other than fit a battery and fill the magazine…”

So with this model now well and truly “out in the wild” and already pleasing players we were really stoked to hear that the newly released KWA Ronin 47 – Kaiju Edition AEG has just landed with iWholesales and is ready for distribution to their dealers in the UK! The Japanese word kaijū originally referred to monsters and creatures from ancient Japanese legends, but the term came to be used more generally to express concepts from paleontology and legendary creatures from around the world, and the KWA “monster” is certainly set to write it’s own legends on the airsoft fields around the globe!

The Kaiju is a limited release gun, with 1000 units only being sold worldwide. It’s based on the Ronin platform, full metal with the ’47 style mag, but this time with KWA’s interesting mix of an AK mag with all the quick insertion properties of an M4 mag; no tricky hook to engage the front of the mag and it drops out at the press of a button. Designed to dominate the field and be disruptive to anyone standing in your way, the Ronin 47 Special Edition is equipped with KWA’s new “Cutter” Muzzle Brake, aggressive 7″ MLOK handguard, and Gen. 2 PDW stock.

It has ambidextrous mag and bolt releases, a factory fitted Gate Titan Mosfet with a flat style speed trigger which is precision machined from billet aluminum, using a hardened roller pin for a slop-free pull. It incorporates a setscrew for easy alignment to the trigger switch assembly unit, and is factory set to single shot and 3 round burst but easily changed with the interface included. It has a one piece rotary hop unit and has an adjustable power system, and it’s been chrono’d at 350fps with a 0.20g, with a 3 or 4fps variation, spot on for virtually any airsoft site!

As with the standard Ronin 47 the Kaiju is a very solid, well built AEG, but one with character and stunning looks to spare, so if this appeals to you then we’d suggest that you have a chat with your local shop or dealer right now!

The RAPTOR GRACH Has Landed!