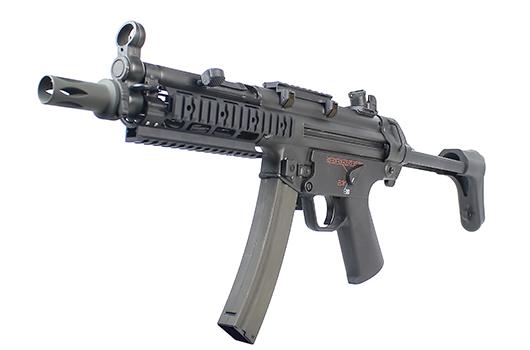 The MP5 is a model that many airsofters own and love, but it does seem to swing a little erratically in the “popularity stakes”! However, with the current crop of “modernised 5s” it could be that the MP5 is on the rise again!

Over the years the “Maschinenpistole 5”, or MP5 has been with us in both electric and gas form, and we still have a great love for the little SMG! We’ve owned numerous variants from various manufacturers (as well as having tested others) and all of them have been lovely wee things!

But what makes us so passionate about the MP5? For us it’s a “no brainer” in that it has been used by military and police forces worldwide, has appeared in the hands of most screen “action heroes” and of course was the firearm carried by the SAS when they stormed the Iranian Embassy! It’s been used by the USN SEAL Teams, GSG-9 and virtually every special operations unit in the western world, and even today we still see the MP5 in the hands of firearms trained police officers! Although it’s a design that has been around for many, many years it’s still one that is “current”.

Although we’re currently looking the crop of the latest “tacticool MP5s” to hit the market, the one we’ve been using most ourselves is the BOLT SWAT TACTICAL, and it’s a fine AEG! We do really like this little MP5 as a model, and this one sings to us not only for the quality of materials and construction, the BRSS (BOLT Recoil Shock System), and the brilliant railed forend, but because it’s also a super nod to the current-day “SWAT Mods” that we’ve seen in “real world” images and just shows that once again BOLT have done their homework in order to produce something different and unique!

Watch out for our look at the “Rise of the Five” in Issue 127 on 15th June to see if the venerable MP5 still has what it takes!