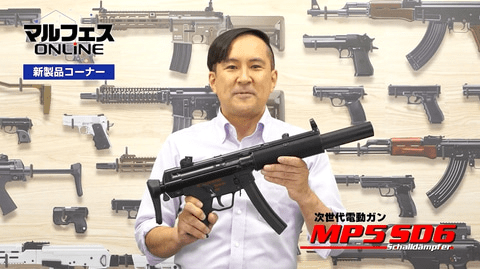 So, our good friends at LAYLAX in Japan have a bit of an inside track on things Tokyo Marui, and they very kindly gave us the nod on the latest Next Generation Recoil Shock (NGRS) model we can expect from the Mighty Marui, and in an extension to their existing MP5 program it seems like the next one to get their magic touch will be the “MP5SD6”!

Now the SD (“SD” stands for “Schalldampfer”, German for “sound suppressor”) is one of our favourite MP5 variants, as in the “real” despite its integrated silencer element it has the same length and shape as an unsilenced submachine gun. Unlike most conventional silenced submachine guns, it fires standard ammunition types with the same effect. The use of special subsonic ammunition is not necessary. The integrated silencer element suppresses the muzzle flash extremely effectively, so as a result of which the weapon is also excellent for night operations using low-light amplifiers. No wonder the MP5SD is one of the most accurate silenced submachine guns of its type.

There are a number of the Red Cell members that already run MP5SD6’s (not counting of course Bill’s “Big Boy” MC51SD that often gets mistaken for an MP5 until the mag goes in!) and even after many years, and many manufacturers dabbling in airsoft replica versions it’s still a real favourite amongst those that love a bit of “old skool” as the original design dates back to the mid-1970s!

We’re certain though that when Marui release this wee beastie there’ll be a whole host of new fans out there too!