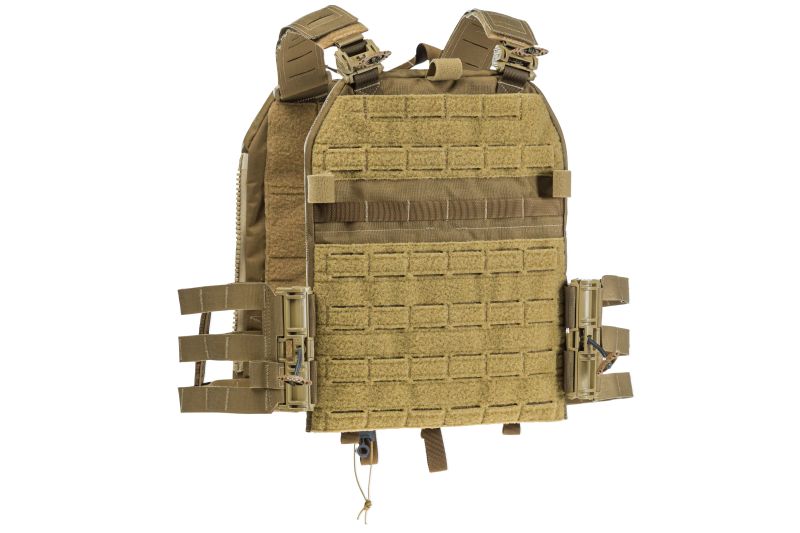 When the AA Crew were over at IWA in Germany earlier this year they met up with many old contacts, but also made some new ones, and amongst them were the guys at Linderhof-Taktik who make some 100% righteous gear!

We just heard from them that today began rolling out their long-awaited second-generation of its acclaimed LT042 Plate Carrier.

Called the LT042/2, this new iteration embodies Lindnerhof’s continuing commitment to expand its range of products while at the same time making greater use of MX—an innovative,
lightweight multiaxial laminate material the company developed last year. The LT042/2 Plate Carrier is distinguished from the LT042 in several ways. The first is by its
reduced overall heft: the LT042/2 weighs a surprisingly light 800g.Also differentiating the LT042/2 is its slimmer shoulder and waist straps. Made of MX webbing,
the straps measure 20mm across—down 5mm from the first-generation model’s 25mm width.

“The reduced weight and slimmer straps were achieved without sacrificing either stability or functionality,” said Lindnerhof-Taktik Managing Director Jakob Kolbeck.

Kolbeck said their design team strived to retain in the LT042/2 the modularity of classic MOLLE plate carriers despite the reduced weight and to permit this next-generation product to be
easily geared up as a heavy loadout carrier. Notable about the LT042/2 is that it can carry plates of various sizes. Its plate compartment accepts SAPI L-sized plates; however, an integrated plate-holding strap gives users the choice of affixing smaller SAPI M or NATO standard 25×30 plates.

The LT042/2 can also accommodate an assortment of extra gear, including breacher tools, radio equipment, and Lindnerhof backpacks. Backside zippers permit attachment of zip panels from
multiple manufacturers but Lindnerhof zip panels in particular, such as the LT632 Zip Panel (which is made specifically for carrying breaching tools). An area on the front is provided to affix unit patches, while inside the carrier is space for attaching panels and pouches.

Lindnerhof currently makes an array of inner padding types—all of these will fit the LT042/2. Cable management is reliably organised with the help of three back-to-back cable attachments.
These are found on the front panel of the LT042/2 and can be used to attach cables or a hydration tube. Longer cables can also be installed directly through the plate compartment via
three user-cuttable seams at the sides and top of the plate compartment (for example, cutting one of the seams at its midpoint would permit concealment of the radio cable running from a
waist-mounted transceiver up to its headset).

The LT042/2 also features Lindnerhof´s patented hook-buckle system but in a smaller size. Not only does this contribute to the plate carrier’s lightness, it also beneficially presents less
potential to interfere with the user’s weapon system.

“The carrier is highly customisable; it’s up to the user to decide how best to set it up from one mission to the next,” said Kolbeck.