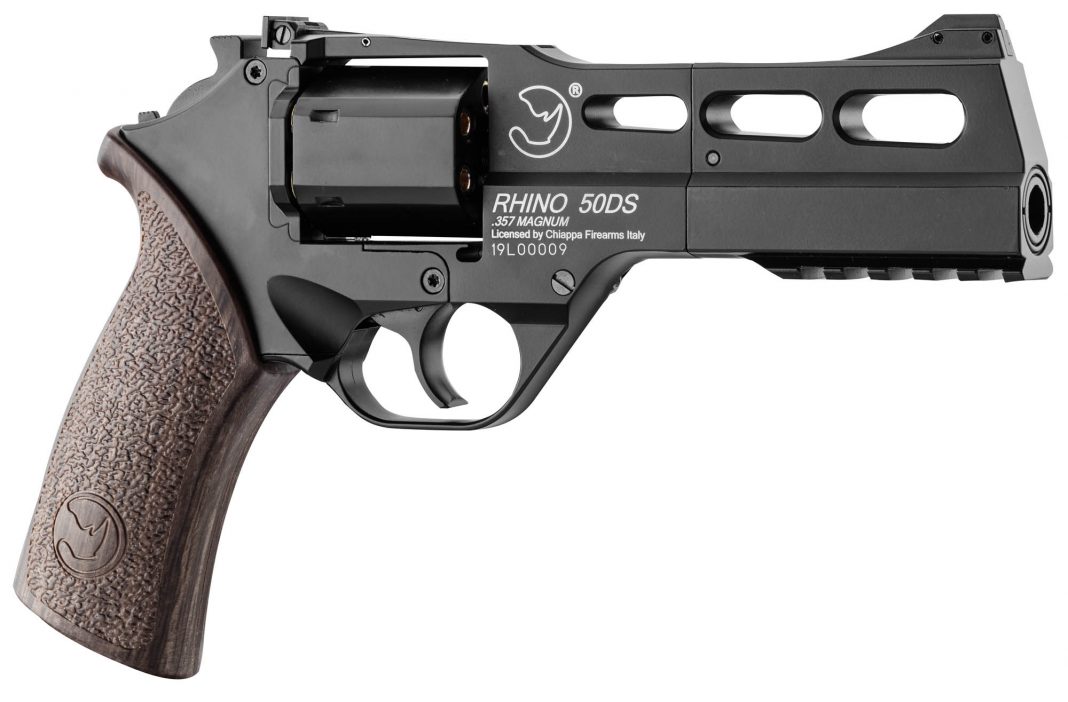 Something a bit different for a cold and damp Autumnal morning start at AA as we’ve been following the release of yet another new pistol model for 2020, and this one’s really shows what can be achieved when a solid licence is in place, and three e partners get together to create something just a bit special!

The Chiappa Firearms Rhino 50DS .357 Magnum Revolver is made under official license from Chiappa, and is made to be an exact 1:1 replica of the real thing! The BO Manufacture website tells us:

“This brand new model was developed by engineers from Chiappa Firearms (Italy), BO Manufacture (France) and Wingun (Taiwan) to offer you the most realistic replica possible: weight, dimensions, operation, handling, compatibility of sights : everything has been thought out and designed to perfectly replicate the famous Chiappa RHINO in Airsoft. Made by Wingun – the masters of Airsoft and Airgun Revolver – in Taiwan, this replica with a superb finish offers a brand new Co2 propulsion system which keeps the energy of the replica at around 0.95J”

This last part of information is especially exciting for players who face strict power limits for their RIFs, and certainly here in the UK it’s an exciting prospect as this revolver will be usable on virtually any field in the country, as 0.95 Joule equates to 320fps/97.2 ms on a .20g BB!

Whilst at first glance the RHINO would appear to be a pistol for the “fanboyz and girlz” amongst us as it’s taken a starring role in the remake of “Total Recall”, “Terminator: Dark Fate”, “Divergent”, and possibly most importantly in the hands of Harley Quinn in “Suicide Squad” (okay, that was the 60DS, but hey!), the fact that it’s actually a site-friendly revolver endears it to us for this reason alone.

Once again the power of proper licencing can be clearly seen in this stunning replica, and if what we’re led to believe is true, that the parts are created in the Far East and the final pistols are assembled by Chiappa themselves in Italy, then this shows and even closer path for other licence holders to follow in the future!

All we can say is that this looks quite the beast, and we’re looking forward to shooting one as soon as we can.

Available from good airsoft retailers now, and on Pre-Order with others in Black or Silver, Full Features Include: