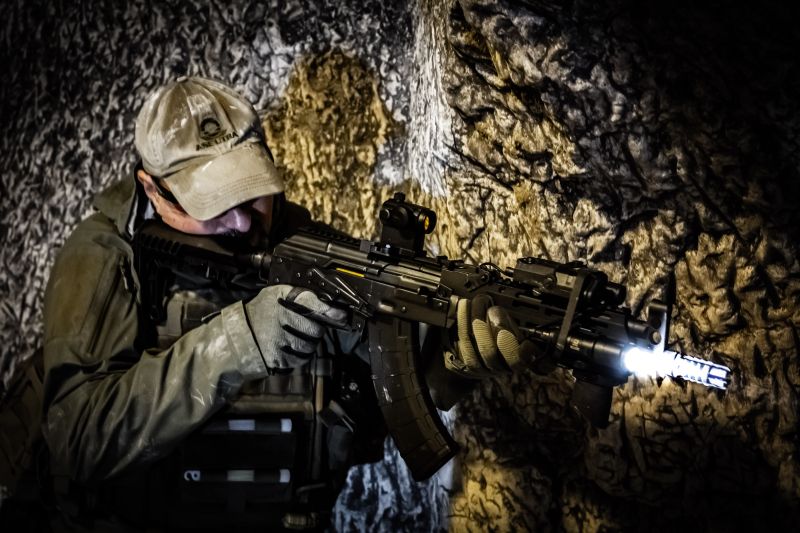 We hope that all of you out there in the airsoft-world have had as an exciting week as we have!

We’re in full-on testing mode at the moment as it seems there are more AEGs and GBBs arriving with us than we can keep track of (it’s okay, we know where they all are!) and both range and in-game evaluations are racing ahead at full speed both in the UK and elsewhere!

We’ve got a big old Issue coming at you on the 15th of the month, with some serious input from both Red Cell and the wider AA Legion; there’s going to be a LOT to go at, and we’ll be leading with our initial look at the all-new MK18 from ICS, as well as spending some quality time with the AKs that are in the long-term test pool!

However, we’ve already got a bunch of AEGs and GBBs lining up for Issue 142 in September and once again we’ll be looking at all things airsoft through a themed lens… what theme you may ask… watch this space, but we’ll tell you now that we will be featuring our usual in-depth evaluations of the G&G Lee Enfield No4, the ARES L42A1, and the SAIGO KYUDU… “long guns” anyone?

But, for this weekend the AA team are busy at games, in the workshop, and out in the woods!

Jimmy tells us that “it’s bench-time again this weekend, what a surprise! I have a DMR which requires some minor wiring work and to bring the joules up. I have a G&G in a sorry state of affairs which will require a new gearbox shell due to cracking the front end as someone thought it a good idea to cram a M160 spring! Some thorough testing on the new Chilun V2 ETU, and then on Sunday I may be back at the motorcross track providing my professional marshaling skills. A busy but enjoyable weekend to be had!”

Larri is out and about as usual, “the weekly CQB event, but we’ve got a new joiner, a “Milspeed” player, so I”l be definitely looking into his style!”, and Stewbacca continues at his usual breakneck pace and tells us that “once again our team will be descending upon “The Terminal” our airport-side gamesite where the indoor LK53 review pics were taken; I’ll once again be running the G&G Lee Enfield No.4 Mk.I SMLE to see how it copes with being run a lot faster indoors at more obvious targets. And maybe take the PP2K out again for the third weekend running, which should tell you how vastly improved it is since the work done on it solved the initial problems I experienced…”

Bill is out in the woods and spending time under some very “hi-tech canvas” as he continues putting the new Snugpak tent and bivvy gear through its paces, and says “I really want to nail down the overnight kit for our upcoming weekend at the National Airsoft Festival at the end of this month. We’re doing things differently this year as we’ll all be staying on-site for the duration so we can meet up with old friends and fellow players more easily, and getting properly into the action with one of the teams so that we can report better…”

With Chris helping a mate to sort out his gear, Bill W-R getting into some “tactical beard-trimming”, and other members of the crew out and about doing their “airsoft thing” it’s definitely going to be a busy one for us, and we hope with you too! As always we’ll sign off for the weekend by saying remember to HYDRATE, and as always Play hard, Play safe, and above all Play with Honour!