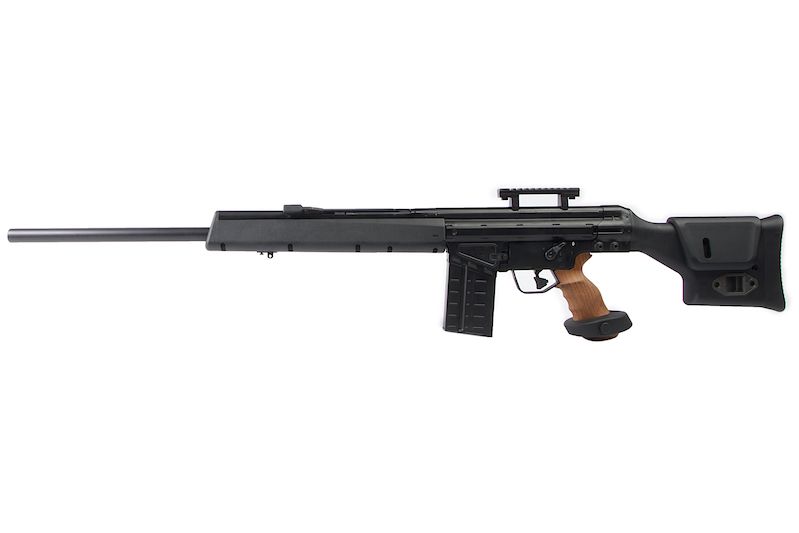 We are 100% off to a flying start on the new issue due to upload on 15 December, and for certain members of the AA Crew, their Christmas Wish has already come true!

For followers of Stewbacca’s exploits you’ll know he’s a man that “All About The Koch” (as his many humorous hashtags tell us!) and he’s already got his hands on his very own H&K PSG1 GBBR that’s come into being thanks to our trusted friends at VegaForceCompany!

First seen at MOA this time last year when Bill and Stewbacca did their livestream with Ray from VFC, the new gas-driven PSG1 is a truly classic precision rifle. However, thus far the PSG1 has only been available as an AEG, and in response to the expectations of many GBB players and collectors, VFC has finally launched the GBB version that offers full, high-quality operating performance.

Due to their ongoing collaborations this “take” is a fully authorized HK PSG1 as VFC have obtained full HK/ Umarex authorization for the overall design, material, operation, appearance, as well as the engraving and trademarks, which are faithfully and fully reproduced.

Due to the mechanically similar operation of a GBBR to the “real deal” you get powerful recoil, last round stopping function, a lightweight bolt and an all-steel fire control configuration, allowing for an enjoyable and realistic shooting experience! There’s also a heap of quality parts like a steel upper and pistol grip assembly, steel charging handle latch, enlarged-nozzle bolt carrier group, adjustable buttstock assembly and that unique adjustable contoured handgrip. By removing the quick release mechanism forearm, you can also easily access the VFC PSG1 GBBR HOP UP adjustment knob at the barrel base… and all without any extra tools!

All in all this new replica is going to please a LOT of players out there, and Stewbacca has already been putting the PSG1 through its paces… for his full report on this stunning new precision gas airsoft rifle be sure to check in for Issue 133 on December 15!