Home News GET YOUR DIRTY HARRY ON – UMAREX S&W M29! 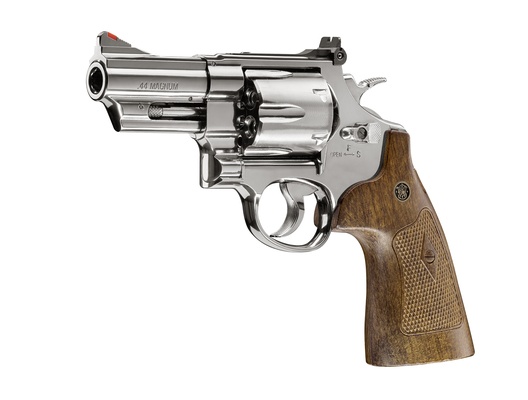 We first saw the Smith & Wesson M29 Revolver in the Umarex “Virtual IWA” video earlier this year, and it looks like they’re finally on the way!

As well as the just over 6 and 8 inch barrel versions that we first saw though, we’re delighted to see a third model in the lineup, and that’s the 3″ barrel “combat” version! However, it’s going to be the longer versions that really tickle the airsoft collector as of course the 6 1/2 and 8 3/8 inch barrel versions were the favoured handun of no less a character than Inspector (Dirty) Harry Callahan!

Umarex tell us that “as the grandfather of all Magnum revolvers, a true classic, the Smith & Wesson M29 has been described in many ways. Thanks to a striking design and high quality, all the models bearing this name have made it onto the silver screen besides being put to their intended use.”

The 6mm CO2-powered version of this icon of the 1960’s and 70’s comes in full metal with high-gloss bluing and a choice of three barrel lengths. True to the original, it takes six brass-colored metal shells, each loaded with a BB and fired by a single/double action trigger. The statement 8 3/8″ version offers the additional advantage of a longer sight line, whilst the 3″ version is perfect for a more easily concealed backup. The rear sight of all versions is adjustable in elevation and windage. A piercing tool for the 12 g CO₂ cartridge is housed in the grip for easy access.

However, Umarex also state that BBs leave the barrel with a potential maximum muzzle energy of TWO JOULES which of course is going to be WAY too hot for most sites, but we’re wondering if they’ve just doubled-up on their descriptions as the Model 29 will also be available as a 4.5mm airgun…

We’re hoping that this is the case as a Model 29 is most definitely an airsoft revolver WE would love to own, and one that would sit perfectly alongside a nice pump-action shotgun in a FilmSim setting… we’ll have to wait and see when one arrives for testing, but for now, here’s hoping!