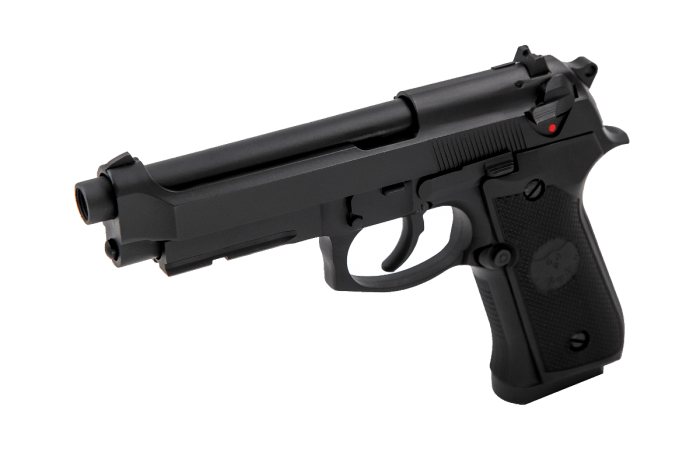 So, what have we come to expect from the RAVEN line of GBB pistols… in terms of the latest models it’s most definitely performance at a very reasonable price, and certain members of the AA Crew have been loving the Hi Capas for a while now!

What we’ve also come to expect from RAVEN is… the unexpected, and the very latest model to hit the range with us for testing is something that we knew was on the way, and the RAVEN R9 screams a bit of “Yippee Kay Yay” to us (okay, we know that Officer McC’s pistol was a 92F…, but still…); it’s nothing less than RAVEN’s first foray into the “BIG B” world, and thus far it’s definitely been worth the wait…

Although the 92-series has a fine heritage in 80’s and 90’s action movies, and of course in the guise of the Pistol, Semiautomatic, 9mm, M9 that was adopted by the United States military as their service pistol in 1985 and served in the hands of servicemen from 1990 until the present day, “airsoft M9s” have largely been plagued by many of the design and operation issues of the real thing, and seem to have fallen out of favour as an “airsoft secondary”… the new RAVEN though may well change that!

Specs for the R9 are:

Perhaps with the R9 though there’s finally a “not-a-B” that will stand the test of time and the rigors of the skirmish field, and thus far even with the amount of BBs we’ve put through our test model it’s running like a train, and shows no signs of slowing down… suffice to say we’ll be taking a much closer look at the R9 in Issue 138 on 15 May when testing wraps, so as usual, watch this space!