Arguably the most anticipated airsoft rifle of all time is finally here. Scott Allan gives us the lowdown on the Kriss Vector.

If you haven’t heard of the KRISS Vector you have probably been living under a big airsoft rock for the past 3 years.

What is it all about? 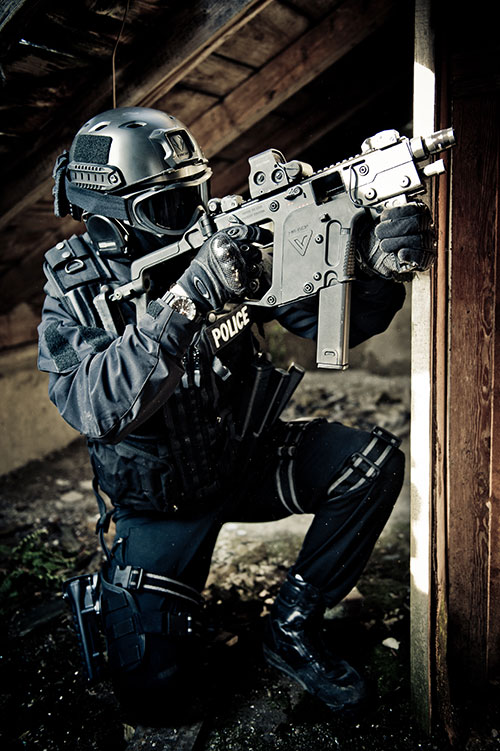 KWA gave themselves the monolithic task of recreating the KRISS Vector down to the most minute detail, not just on the outside but the internal workings also. KWA has been around for many years and manufacture some of the best gas blow back (GBB) and electric rifles I have ever seen. Supply issues for Europe have been recently rectified and 2013 should show that things are moving full steam ahead for all stores, which means we can enjoy fruitful stocks of all replicas.

The KRISS Vector has been on the design board for years now, and have heard many claims of “it’s nearly here” and the oh so repetitive “this year”, which is far too commonly used (the Real Sword M4 range that has all but vanished being a good example). The Vector always seemed to be so close, then everything would go quiet and there would be a little more excitement and then so close…. then…. nothing. Well the wait is over, it is here! No BS either.

But is this a new high point in airsoft replicas, or just another high end gas blow back that cost you a fortune but you never use? There is only one way to find out….

“The Vector” is claimed to be the single most faithfully replicated airsoft gun ever made. Normally trademarks are a hindsight or added as a little extra. Occasionally the trademarks are entirely wrong with the item they are on anyway! The Vector was built with not only just trademarks but with full cooperation from KRISS Arms, in every part of the design phase right the way through to the end product. The KWA version is even advertised on the KRISS Arms website – that is how proud they are of this product, even to the point where they are also helping with the distribution. Now if only more firearms manufacturers put in this level of effort, we would have a massive range of top end, fully endorsed products. 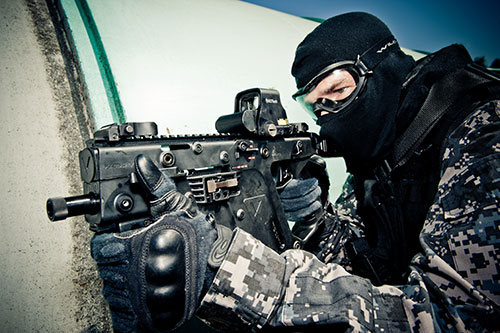 Well the real steel KRISS system advertises a total reduction in recoil and muzzle climb – a pretty impressive claim I think you will agree. So how have they succeeded where so many…. nay, where every single manufacturer of firearms has failed before? The answer is their patented delayed blowback KRISS Super V System. In essence it is a simple yet genius design, redirecting the bolt off axis down behind the magazine (which is why it has a unique body design). Because the bolt travels down toward the ground at around 30 degrees it redirects the recoil and the muzzle climb. The best ideas are often the most simple.

The bodywork is polymer where it can be to ensure it is very tough and lightweight, which is always a priority for modern firearms. The days of heavy blocks of steel and wood are largely gone. Designed as a sub machine gun (SMG) the Vector fires a pistol round, in this case the ever popular 45 Automatic Colt Pistol or ACP (11.43mm x 23mm), which is the same round the 1911, UMP and M1A1 Thompson uses. With a long and a short magazine available it holds either 13 or 30 rounds which is a fair amount of lead. The 45 ACP is not a new round (considering the state of the art design of the Vector), in fact it is over 100 years old. One of the reasons this round was chosen, apart from its popularity, is that it gives one of the biggest punches and, in turn, more recoil than the 9mm round. KRISS wanted to prove that their system would handle any and every round regardless of the recoil it generates. So far it is all very impressive. They were even spotted in films such as Resident Evil: Retribution and excellent remake of Total Recall, not to mention the ever popular Call of Duty and Far Cry computer games.

Externally KWA could not have done a better job; I mean really they could not have. It looks and feels just like the real version, which I’ve seen many times at various trade shows. The first thing you notice when you pick it up is the overall size and weight. Coming in at 2.83kg or 6.24lbs (in old money), it is exactly the same weight as a real version loaded with 13 rounds. The airsoft magazine issued is the 49 rounder, although a shorter 24 round mag is also available. It mimics the Vector’s bolt system with the KRISS Super V System and the KWA Force Velocity Engine – I’m practically moist by this stage – and the charging handle feels great; solid like it was designed to work the real version. 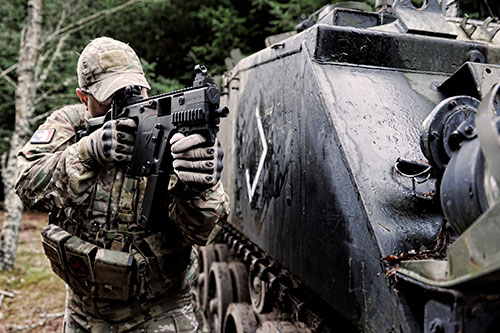 While testing I had to strip it apart almost straight away (after reading the manual of course) to lube it up using the silicone oil dropper provided. All the internal parts are a tight fit and it is comforting that tolerances are clearly being kept in production. I did notice that it was important to let the charging handle come forward under its own steam rather than riding it forward, again like a real weapon system. The folding stock is solid and firm with no wobbles to speak off. I doubt I would ever fold it for any other reason than to store it, as it is fairly compact. The barrel thread is 16mm, the same as the MK23 Socom pistol made by TM, so those adaptors should work if you already have a silencer you want to use.

The large magazine that comes with the Vector is a big beastie and it holds a lot of gas, which is always a very good sign in my books. Too often magazines just seems to run short, the worst culprits being the 1911 series, with thinner magazines that are notoriously susceptible to cold conditions. I was slightly surprised (although not sorry) that the package comes with a large magazine and not the short version. The magazine holds 49 rounds, which is enough for most types of game that I would use something like this. Spare magazines are available around the mid £40 mark which is pretty average for the size of the magazine. Pouches may be an issue though, as it is a long chunky magazine, may be something like a UMP pouch will do until a specific pouch is released.

It is not only better than most GBB systems it is the best system I have used, ever, hands down, without a shadow of a doubt.

Each Vector comes with removable folding top sights, a 20mm top rail, 20mm side rail and a vertical removable front grip. This allows you to customise your SMG to your preferred load out. As well as the foldable stock this makes a great compact GBB. Whilst heavier than the TM MP7 and the KWA MP9 it is by no means too heavy. I feel the weight adds something to the package, as well realism it gives you a sense that you are actually carrying something that should inspire confidence and that it not something I feel often from an airsoft rifle.

Looking at the stats against the real steel version it is easy to be impressed. Attention to detail has been the key in the production, coupled with KWAs engineering and technical knowhow.

The usable performance is often glossed over with GBBs. It is not just an important factor, it is essential and with any GBB rifle I am a hard man to impress. Gas blow backs are even more difficult to get right and, for me they are often painted into a corner as I just don’t deem them serious enough performers to warrant the label “great all-rounder”. That may sound harsh or kind of unfair but then life is not fair. Gas blow backs (sadly) will never measure up against a 300 round high capacity magazine being unleashed at 15 rounds per second in a straight toe to toe fight. Period! 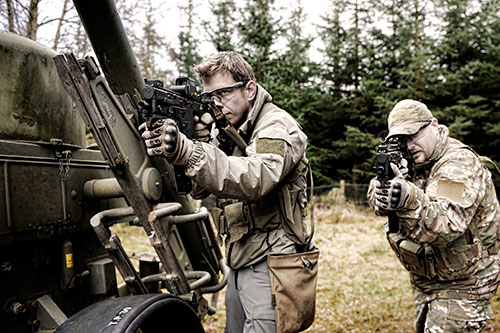 On the game site I didn’t have the luxury of many spare magazines (they hadn’t arrived yet) so my involvement with the games was rather limited unfortunately. Nonetheless during the games I used it I was quietly confident every time I shouldered the Vector that is was going to snap a round rapidly toward my target. Running in 5c temperature I didn’t expect anything very special but with Blaster 0.25s I was easily (and I do mean easily) hitting out 40-50 metres with a man sized grouping and it finished the magazine on single shot with a little bit of double tap use. I am impressed on just about any and every level with this GBB – and I am not the only one.

Willie a player at Airsoft Edinburgh said this:
“Impressive out of the box performance, solid build quality. Positive controls and very accurate in equal measure. Personally I really love the two round burst and the trigger pull. Both left handed and right handed players can easily use it as it has ambidextrous controls. Feels comfortable for me to shoulder, I was really surprised too when I got two full magazines out of a single charge of gas which bodes well for the warmer weather… if it ever gets here.”

Ricky Cairns Head Marshal at Section 8 Airsoft commented:
“On a personal note I was impressed by the build quality and overall finish. the fact that it was minus two degrees and it fired consistently on semi, burst and full auto while most player’s GBB pistols were dead from the cold! KWA have done a fantastic job and if you are in the market for a GBB PDW this is the one to get.”

Conclusion:
With a RRP of £330 it isn’t an easy spend for most players, given that it carries a higher price tag than a large number of electric rifles. At the same time it is also much cheaper than a large number of other GBB systems available like the G&P WOC rifles based on the Western Arms system. More importantly it is not only better than most GBBs systems it is the best system I have used, ever, hands down, without a shadow of a doubt. The performance is the best out of any GBB of its type I have ever seen in cold weather, unfortunately there was no hot weather available in Scotland at the time of writing! I can only imagine what this system will be like in the warmer weather.

In short if you really want a GBB SMG or rifle this is a brilliant, hard to beat system. If, on the other hand, you are looking to dip your toe in the GBB market then perhaps something like the G&G Combat Machine GBB might be worth trying before splashing serious money on one of these. After all it is a lot of cash but you are getting exactly what you pay for, performance, licensing and build quality.

Congratulations to KWA and Kriss Arms for producing an awesome bit of kit.

TEAM DEBATE – TACTICAL LEVER ACTION, WHICH SIDE ARE YOU ON?