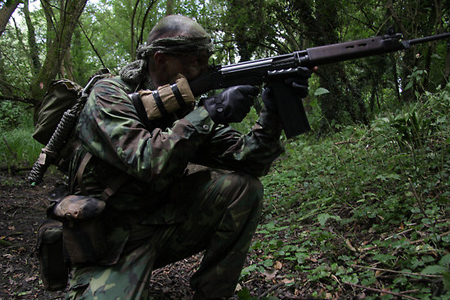 Well here we are again at the end of another… how did that happen already???

Nige and Bill had a day out of the office as they ventured deep into the “Nuprol Skunkworks” yesterday… although we won’t mention the plastic dropsheet… oops, we just did! All we can tell you now is that Ross and Mark have been cooking up a storm of new things, and although we can’t say exactly what they are yet, we can tell you that Bill found then all “very pleasing”!

Issue 138 is looking righteous, 100% on schedule, and although there’s still work to be done we’re looking forward to showing you our latest reviews, articles and projects on the 15th… it’s another very special mix of all the things that we know you love. Bill told us that as well as finishing up on some final editing on the new issue “I’ll be sorting out my winter gear, giving it some TLC and prepping it for storage. I’m looking forward to bringing out my summer gear and getting this “game ready”, especially my Nam-soft “Aussie” gear as I have a special game in mind later this Summer. And of course there’ll be my usual quiet Saturday PM on the woods range to check out the upgrades to my AMD65 along with testing out the new G&G GK-12!”

And as the weekend beckons, here in the UK it’s looking like it’s going to be a scorcher! We know that many of you that we speak to around the world are geared up already and raring to go! The Airsoft Action crew are as busy as ever of course… although it seems like a couple are fully intending to take some R&R in the sun involving kayaks, wood-fired pizza, and perhaps an adult beverage of choice!

Stewbacca however says that “last week the rain pushed us indoors and further north than planned and we did some skirmishing as well as team operations drills for our upcoming weekend MilSim (my first since coming to Taiwan!) so this Sunday we should hopefully make it to Hutoushan outdoors in the mountains again for more of the same….” whilst Miguel reports that he and his fellow Ghosts ” are probably going to keep on working with the new guys; last Sunday we had some communications training (with 10 guys using radio we must have some organization), but this Sunday we will probably focus more on navigation.”

And the workshops look to be busy as Dan tells us that “I mainly have plans to sort and reorganize the shop as it’s become pretty cluttered lately. This probably means dismantling the Lego collection to free up some needed shelving. We’re halfway there as my 4 year old has been steadily dismantling the Rebel fleet as he’s gotten taller and able to reach more and more shelves!”, whilst Jimmy says “my bench shall be pretty busy this weekend. Firstly try and solve the problems WE created on the Bowning Hi Power, two Specnas requiring velocity increases along with extra range and accuracy, an A&K M249 seeking velocity increase and reliability, a Nuprol AR of some description in for a basic service, a previous build on a Valken Tango which has stripped a bevel or a piston and two BOLT M4A1s which need rattle proofing. One shall be very busy pleasing the masses. Courtesy of Scott @ Alpha Delta my weekend just got longer as I now have a Cybergun Colt with full-auto issues, an HFC which doesn’t work, a Beretta which wont hold gas, and another BOLT Mk12 which needs stripping for Cerakote! I hope somewhere in that schedule there is time for and adult pop or three….”

Bill W-R rather cryptically told us that “this weekend I’m out on Salisbury Plain. Can’t say too much except I will be wearing a hi vis and riding a Grizzly…” and Boycie chipped in to let us know that “my plans are for a family day on Saturday with a little time on restoring a plate carrier and belt combo. Sunday sees me back at work at the range and coaching marksmanship with various members.”

But probably the best quote of the week came from Robbie in the USA who told us that “I was hoping to get back to indoor airsofting soon, so maybe this Sunday I will swing over to TAA in Rockville and have a look, and take some photos. It’s been decades now since I owned the place, good friends of mine still own it…”

And ultimately that’s what it’s all about isn’t it? Getting out to hang with friends and indulge in some AIRSOFT! As always, all of us at Airsoft Action wish you the best for your own airsoft adventures, and we’ll sign off as usual by saying Play hard, Play safe, and above all Play with Honour!