Home Global Airsoft THE TRUTH OF IT – G&G G2! 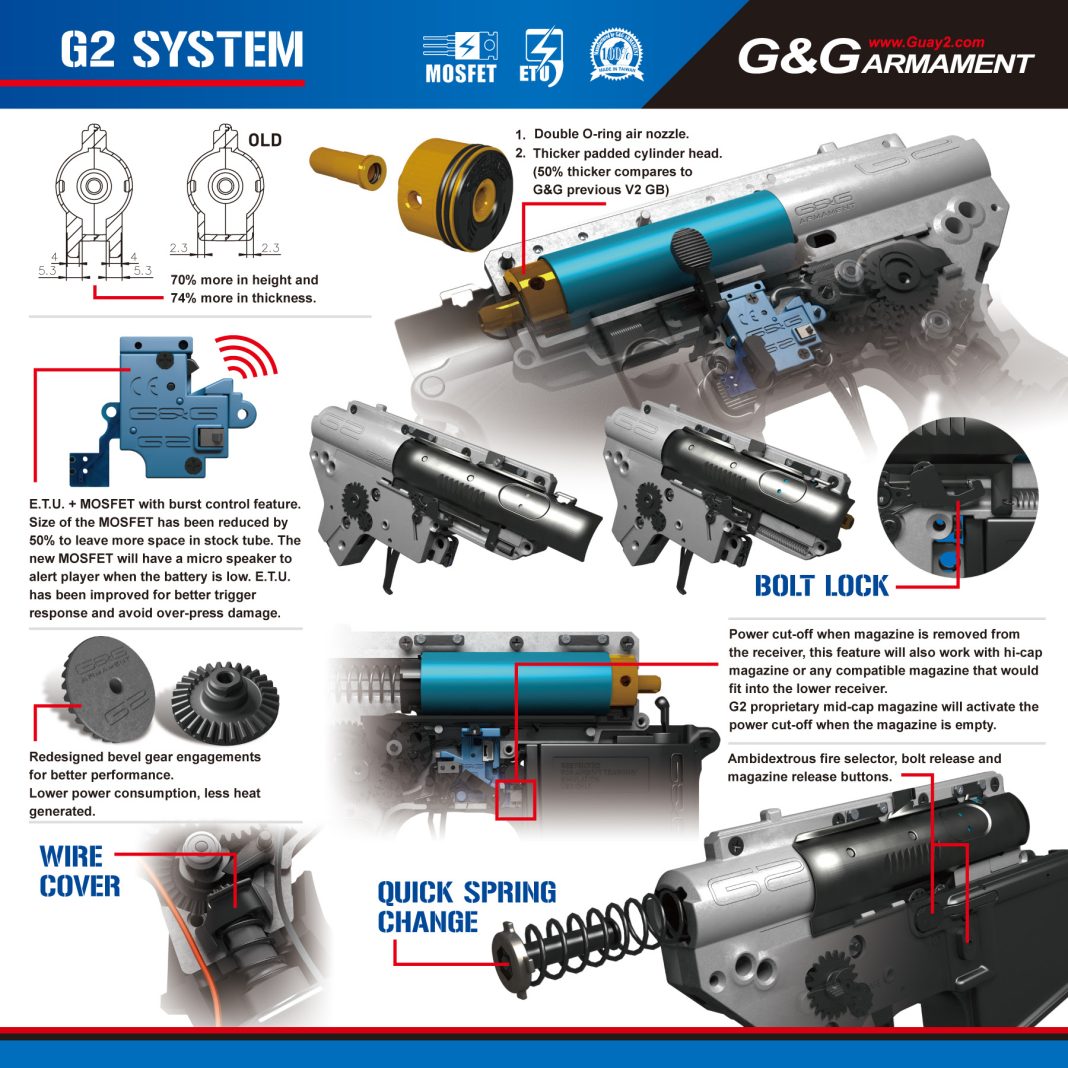 First off, apologies for the lack of post yesterday, but the fact is we were hard at it on the range and stayed out while the weather was good… you know how it goes, new AEGs, fully-charged batteries and a big old bag of BBs and time just flies by… you, we’re just as much suckers for a good shooting session as all of you are!

However, we’re back in the office as usual today, neck deep in files, folders and transfers from the AA Legion members around the world getting Issue 139 in build, but we had a really interesting email from our good friends at G&G Airsoft telling us, in some detail, about their G2 System! They told us;

“We took the existing version 2 gearbox and strengthened its structural design by adding extra material in the front. We’ve increased the front of the gearbox’s height by 70% and the front width by 74% thicker to prevent any front-end cracking from overuse.

Other improvements were a 50 percent size reduction of the current metal–oxide–semiconductor field-effect transistor (MOSFET) found in the Combat Machine SR Series and an increase to the performance by 100%. Also, a built-in speaker in the electronic trigger unit (E.T.U.) to notify the player when the programming is properly synced. The ETU can be programmed to a 3-round or 5-round burst. Additionally, a warning sound will indicate when your battery is low to avoid any damage to your AEG. The warning sound can indicate the motor being jammed or spring cannot be compressed due to the low battery.

We upgraded the air nozzle with a double o-ring and cylinder head for improved air seal and compression, a quick spring change that allows a player to easily transit from outdoor and indoor feet per second (FPS) rules quickly, and a redesigned bevel gear for better engagement and performance. New technology was also added with a firearm simulation system which prevents the player from dry firing with an empty magazine inserted or a removed magazine. The only way you can fire is by inserting a fully loaded magazine.

A G2 proprietary magazine design will activate the power cut-off when the magazine is empty. A functional bolt lock for easier access to the rotary hop-up unit. A follower is installed in each G2 magazine to ensure seamless feeding and to prevent any wasted BBs from following out when the magazine is removed.”

As we’ve currently got a couple of brand-new G&G models in testing right now this is very interesting information, and it’s genuinely refreshing to see a manufacturer giving us all the nitty-gritty on their ongoing improvement programs!

Airsoft just gets better and better, and although some of us do have misgivings about the sheer amount of technology going into AEGs these days, when you know what’s there and, perhaps more importantly WHY it’s there, then at least you know from the outset what you may need to contend with in the future.

So, from all of us at Airsoft Action, thank you G&G for making your information so easily accessible, and we hope that other manufacturers around the globe follow your lead!