Home The Armoury Something For The Weekend – Simple “Rattlecan” Camo! 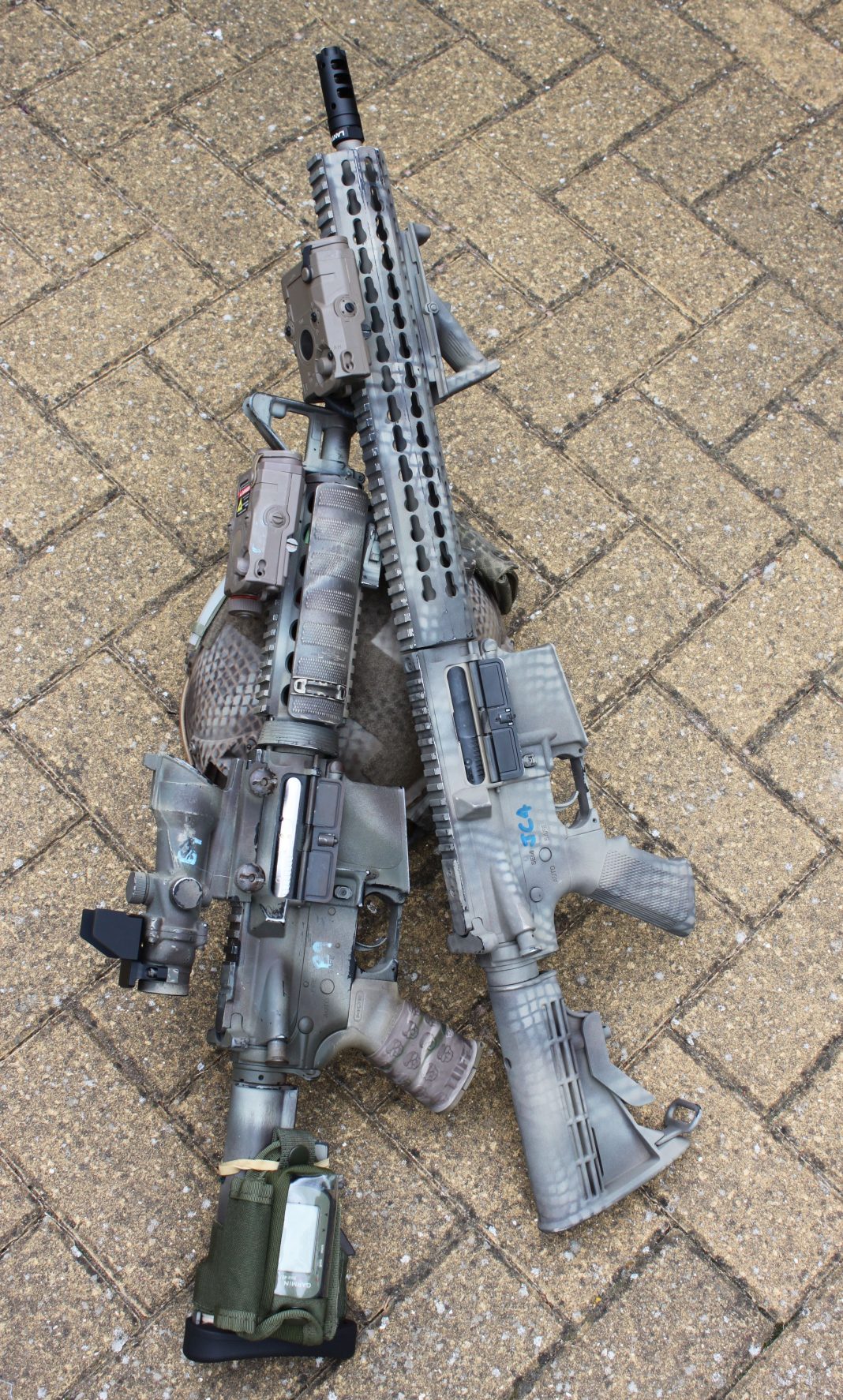 Another weekend to prep, and at least for the UK games are now very much in our future! Let’s face it though, we spend a lot of time, effort and money putting together our camouflage system of clothing and gear, but whatever pattern you prefer you still end up with a darn great black rifle sticking out in front of you!

There’s always a bit of a debate in any airsoft group as to whether camouflaging your precious AEG or GBB is a good thing or not. We’re quite aware that some people look on this practice with horror in their eyes and we do understand why. Ultimately there is no such thing as a “cheap” RIF so do you really want to cover all that black and shiny awesomeness with paint?

In some cases the answer to this is “yes”; in the woods, just as we apply can cream to break up the outline of our face, so too should the outline of our rifle or carbine be muted as well. When we look to build a woodland rifle we will immediately think about both the specific environment and the time of year I’m going to be using it; if it’s high summer and we’re going to be playing in dense, sun mottled foliage then we’ll look to a fairly “bright” palette of colours with more green in it than anything. If it’s autumn use though we’ll look to more browns.

Consider this though; if you just paint your rifle in one block colour, although it will be better than plain black, it’s still just going to be a block! What you need to look at is blending colours effectively and picking up highlights so the overall shape becomes distorted. Think about those clever people that actually design camouflage patterns and you’ll come across words like “fractal” and “pixelated”; good camouflage is all about the “blend”.

Doing your first “rattlecan” paintjob can be a nervy affair, and many players we know shy away from doing it in case they get it wrong; THERE IS NO “WRONG”. Planning though is the key part of the process that needs to take place before a can of paint is even rattled, to look at what the rifle or carbine needs to work alongside, and in this case it was Multicam so we knew it needed to be finished in reasonably mute tones that would work in both scrub, heath and trees.

With this established STEP 1 was to mask all the areas that need to remain paint free, any exposed wiring, the muzzle and the magwell; do not let paint build up in here as it can effect smooth magazine release. Then take a clean paintbrush and thoroughly brush any dust away; it’s actually a good idea to use the paintbrush between coats throughout the process as you do tend to get a “paint dust” forming as you go along. Preparation really is your friend when painting!

STEP 2 is to apply a thin, even base coat which holds the overall pattern together; in this case tan. Always follow the directions on the can and apply multiple thin coats rather than one heavy handed one, and always try the spray on a separate area first to see what the coverage is like. Most importantly don’t rush things; some people like to hang their painting project but we prefer to do ours on an old workmate as hanging implies a roof which in turn means that paint fumes don’t disperse so easily.

Once the base coat is touch dry (again follow the instructions on the can as they are there for a reason!) STEP 3 is to apply the first of the blending lines and we chose to use dark brown for this. You don’t need to be too precious with these as you still have a way to go!

STEP 4 is to apply the third colour, olive green this time, in a light misted coat to start filling in the gaps between the initial blending lines; it doesn’t matter if you overlap the brown and the green slightly as this is where things start to come together and the overall outline and shape of the rifle starts to blur.

STEP 5 is to take an old scrim/camo net and lay this over the rifle, return to your light tan and spray through it. You need to get the scrim net as close to the surface you’re painting as possible so as to avoid “bleed”; what you want ultimately is a nice, even “snakeskin” pattern that really does blur outlines and shapes well.

Once this is done and everything dry it’s a quick return to the green for a final misting coat which nicely brings the whole project together, and tones down the harshness of the tan “snakiness”. The next part of the project, and the finishing touch for us, is to “weather” the whole rifle; some folk don’t like to do this but leave the rifle to wear naturally, but if you know where a rifle should wear you can induce this to achieve a “battleworn” effect. If you do want to take this step then it’s as simple as taking some fine grade sandpaper or wire wool and gently rub down the areas you want to take back to bare metal.

There are lots of matt finish spray paints out there on the market, some easier to get hold of than others and we’ve used pretty much all of them over the years. In this case though we worked with the range of “Ultra Flat Paint” (UFP) from NUPROL; the team there, airsofters themselves, have recognised that certain “big name” brands of paint are both expensive and hard to get hold of so they’ve gone out and sourced their own, and they’re available in most good airsoft shops now. NUPROL offer the popular colours of Brown, Tan, Olive Green, and Black that we need for a really good spray up, they’ve priced them sensibly and made them easily available through their extensive dealer network. With an RRP of £7.99 a can there’s no reason why you can’t afford a good sprayjob now and be ready to get your game on soon!