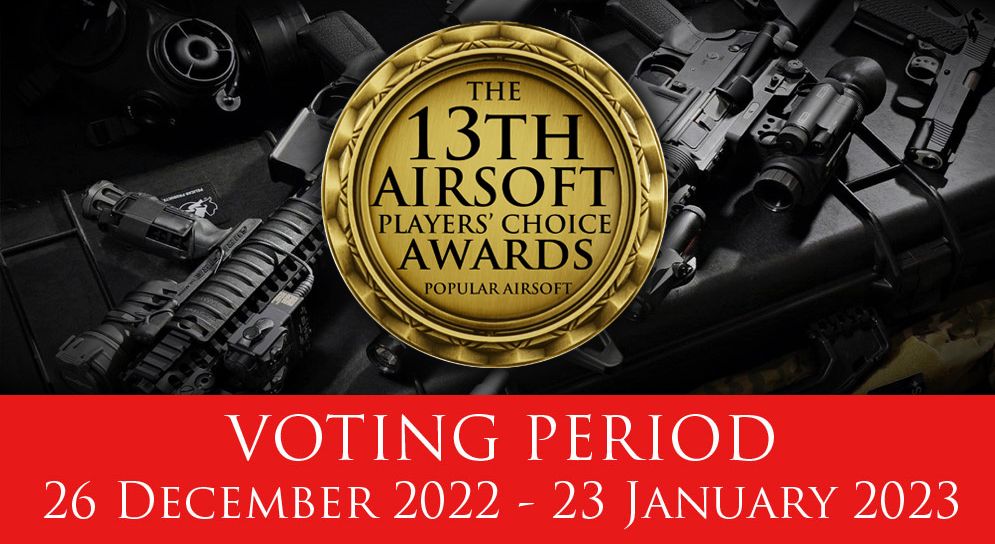 HAPPY NEW YEAR to you one and all, wherever you may be around this big old world of AIRSOFT!

It’s always a bit of strange time of the year where we all reflect on the twelve months that have gone before, but also it’s a time when we resolve to power forward into the next; at AA we’ve had an absolutely brilliant year thanks to all of you that read the magazine each and every month and follow our news here on the website and social media, and this has culminated in our nomination for not just one, but TWO AWARDS in the PopuLar Airsoft PLAYERS CHOICE AWARDS again for BEST MAGAZINE PRINT OR DIGITAL and BEST ONLINE NEWS SITE! Thank you to all of you that voted for us in the nomination period.

But now we will humbly ask you to PLEASE CAST A VOTE FOR AIRSOFT ACTION as the main voting period is now underway!

We wish everyone that has been nominated too in all the different categories the very best of luck too.

And as always at this time of year it’s also a time when we have to say goodbye to some old friends and welcome in new ones!

Sadly for us Red Cell member Bill W-R is leaving the fold due to his growing commitment to becoming, along with his able partners, a Site Owner and Operator! We’ve always maintained that running games and running a magazine are incompatible due to inherent conflicts of interest, so Bill will be concentrating on running games at HELLFIRE CORNER down in Kent, and we wish him all the very best with this whilst at the same time saying a big “THANK YOU!” for all he has done as part of the AA crew… don’t worry, he’ll still be around as we’ve already discussed working with him on a few “skunkworks” projects…

On a more positive note we’ve warmly welcomed Neil W into our close-knit group as we head ever closer to realising our video collaboration between AIRSOFT ACTION and his RACKNLOAD shooting channel! Neil tells us that he’s almost there with the first video, so expect to see some format changes here on the website as this kicks into gear…

All in all we are looking forward to 2023… A LOT… and the new monthly issue for January is well on the way to get things rolling!

There are plans in the making that will come to fruition in the coming months, and as a general resolution from the team as whole is “to play more airsoft” we hope that we’ll see you somewhere at a game soon!