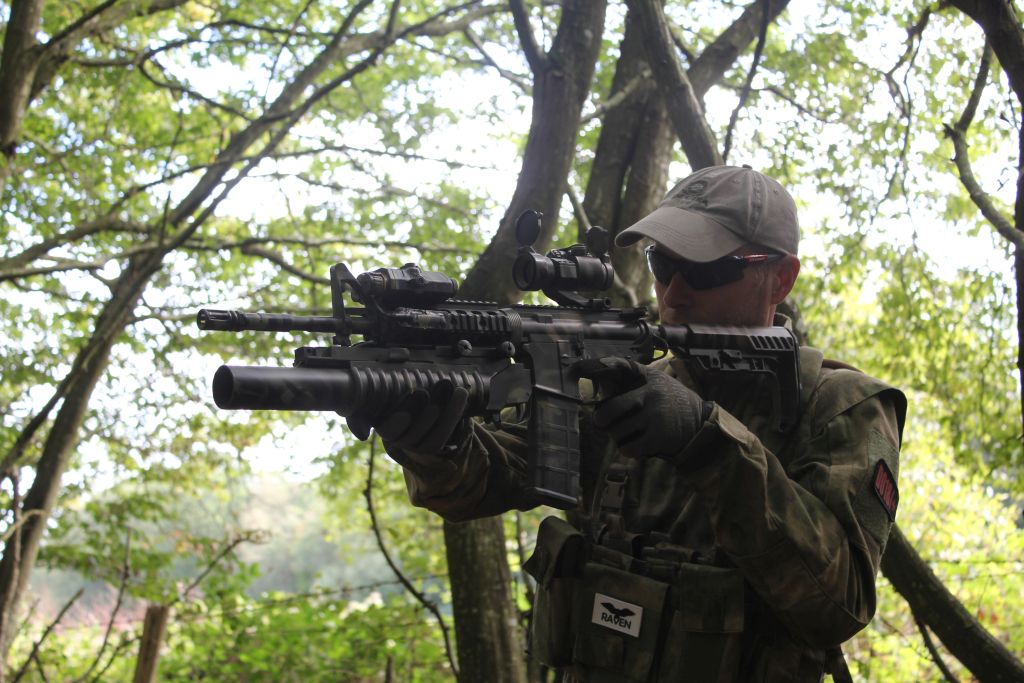 So, another weekend spotted, and we’re raring to go, what about you?

Issue 139 is now fully “in build” ready for 15 June, and we’ve got something just a bit different lined up, although you can be sure that it’ll still be full of the latest AEGs, GBBs and gear to hit the market, all thoroughly vetted by the AA team!

Bill is, as always at this time of the month, chained and restrained to his office chair in order to pull the new issue together, but he tells us that he also has some final testing to do on some “historical models” and he seems rather taken at the moment by a new, prototype “1911” that he’s got from RAVEN and a rather elegant Webley revolver that’s come his way via iWholesales… old skool and new skool mix and match there for sure, if ever we saw one!

Games of course are fully back on, and more and more of the crew are out and about playing again!

Jimmy in the UK tells us that “I’m off to local site “Cool Under Fire” on Sunday just to play; no reports, no articles, I’m just going to play airsoft and enjoy it! I’m going to be trying my hand at sniping and put to the test my art of concealment, so I’ve been studying many videos, be they airsoft or real world scenarios, in the hope to go undetected and wreak some havoc on the enemy! I shall be fielding for the first time my highly customised HPA TM VSR10 GSPEC, and on another first I shall be taking with me as my secondary my TM silenced FNX45. A fair amount of prep has been done leading up to Sundays game, far more than a normal skirmish day, and for the first time I am actually going in with no Hi Caps or drum mags and shall be carrying only two 30 BB magazines… Wish me luck!”

Miguel is also rolling out in Portugal as usual, and says that “this weekend we are hitting Op. Interior, a game that will take place in Castelo Branco. We will depart Saturday, have dinner with other players, sleep there and then try out a field with over 1000 hectares! After the game, we will have lunch with all participants! But this game will be even more unique since tomorrow I will be picking up my friend Elvis Varcelija; he will be staying with me and will go to the game with us as well! A great weekend is ahead indeed!”

Stewbacca reports from Taiwan that “I should hopefully be playing either Hutoushan, or the tile factory in Sanzhi way up north depending on transport and weather, and I’ve got the VFC M733 to try out! Perhaps also my PSG-1 to do some more tuning and testing of different ammunition…”, whilst Larri in HK tells us that “I will be testing a new CQB game mode and also visiting a local airsoft internal competition!”

Dan in the USA says “it’s mostly going to be a family weekend, but on the airsoft front, I’ve got a few small exterior details I want to finish up on my Kar98K project for its game day debut on the 25th. I’ve inadvertently ended up choosing the “advanced difficulty” route when I opted to convert a real stock for use… which has beget having to buy a number of real steel parts in order to properly finish it up due to the airsoft analogues being quite off-spec. It’ll be worth it in the end, despite my wallet complaining otherwise!”

We’re making a point each week of letting you all know our own plans when it comes to airsoft, and around the world the members of RED CELL and the AA LEGION are out and about doing their “6mm thang”! But what are your plans? What are YOU getting up to?

We’d love to hear about your own airsoft adventures whatever and wherever you may be, but as always Play hard, Play safe, and above all Play with Honour!!