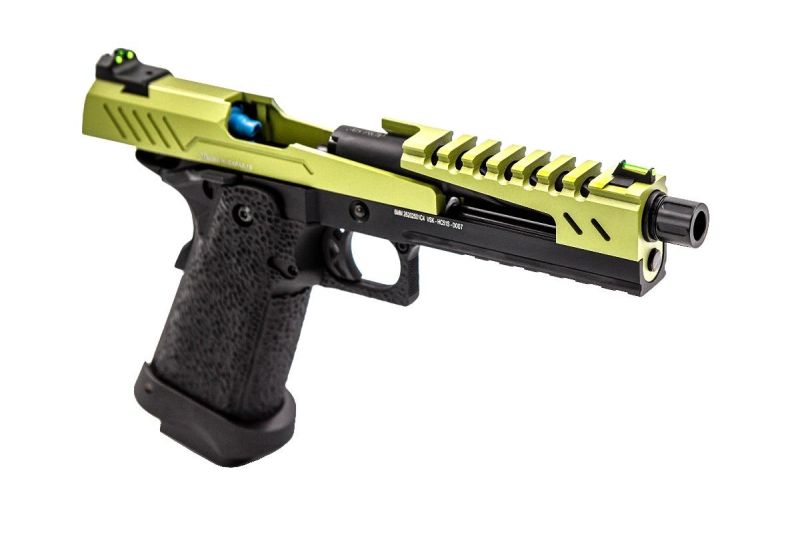 In the current issue of Airsoft Action our international team of AA LEGIONNAIRES talk about their plans and resolutions for 2023 and how they want their year to progress; Bill talks about getting his fitness back up to par after his illness, and he also staked his intent to “shoot more AEGs and GBBs”, and his year starts well as he heads back to the range proper to start working his target skills back up with one of the VORSK pistols he reviewed initially back in 2020!

I’m massively lucky and I know it! I get to shoot virtually every AEG or GBB that we talk about in Airsoft Action, and given our relations inside the airsoft industry I get to see a lot more too! However, when I’m testing, yes, I want a new model to have solid range and the ability to hit targets consistently (don’t we all?), but the fact is that I tend to work a lot during the testing procedure with steels and sandbag targets… as long as I can hit “centre mass” I’m happy!

However, the exploits of my colleagues, especially Stewbacca with his competition shooting, has reminded me that I need to work on my pinpoint accuracy as well as my “game accuracy”! My old mate Marcus (who runs All Ages Airsoft) and I talked at length about this at the back end of 2022 and made a resolution that we would get together once a week before opening to shoot on his basement range (to be known from this moment forth as THE PIT!), and yesterday was our first session.

I took along my new VORSK HI-CAPA 5.1 that I put together to use alongside the awesome new ICS/EMG Mk18 to continue bedding that in properly, but I thought it would also be a great opportunity to look back on one of the VORSK DIARY long-term test-pool pistols; I haven’t spent any meaningful time with the VORSK HI-CAPA 5.1 SPLIT SLIDE for a while, and after yesterdays session I cannot really understand why this is so, as it’s a magnificent GBB handgun!

The Split-Slide was the first in what I have referred to as “VORSK WAVE II”, and oh my, what a huge, happy handful of airsoft fun it is! The Split-Slide has everything we’ve learnt to expect from VORSK, a mix of high quality polymers and alloys, but this time with a lovely textured grip and a flared, oversized magwell which aids immeasurably doing fast reloads! The lower frame of the pistol features a rail which comfortably gives a home to an NP taclite such as the NX300. Up on top of the slide you get, as we’ve come to expect, raised fibre-optic “irons” which are brilliant in low light situations, and super-fast to acquire, and the attractive spiral-cut outer barrel of the pistol is threaded for suppressors and tracer units; this removable threaded adapter comes so any 14mm CCW threaded muzzle attachments can be used, and is finished with a knurled cover to protect the thread itself.

But it’s the slide that makes all the difference on this pistol, that Split-Slide design, which means only the rear half of the slide actually moves, dovetailing beautifully with the fixed front half so there is much less weight moving, making your gas usage massively more efficient, and the cycle time meaningfully less when it comes to taking follow-up shots! Down in THE PIT it was chilly.. REALLY chilly, and although we were using VORSK V8 FUEL which handles colder conditions well, there was still a difference between performance of the standard 5.1 and the Split-Slide on the same magazines.

The Split-Slide performed very well on paper targets, using .28g VORSK BBs, even on a cold morning, and when we tried it on .30g things got even better… this pistol does seem to like slightly heavier ammo, even incrementally so! It is incredibly efficient on the VORSK V8 FUEL, cycling the rear of the slide quickly and efficiently, and having no problem whatsoever emptying the entire 28BB magazine. Accuracy was solid, although my groupings were not as tight as I would have hoped… I could actually feel myself pulling up and to the right which I need to remedy as this will be amplified when I come to shoot at longer ranges! Less steels and more papers are in my future I feel…

The Split-Slide was actually a joy to shoot with, I’d just forgotten how much fun! And I was not alone as Marcus enjoyed shooting it too, enough so that when we finished up he immediately went and ordered one for himself along with a couple of CO2 mags to go with it! This is most definitely a pistol that I will be using to work up my target accuracy again, and it is also most definitely one that won’t be staying on the pistol-pool shelf!

This is another fine VORSK example of how elegant and unique design can be married to the total understanding of how a GBB pistol works to create a model that if anything shoots even better than it looks… although I now want one in GREEN to match my PAMG setup as it’s time to put more colour into my airsoft life again, in all ways, as I start a whole new year of the VORSK DIARIES!