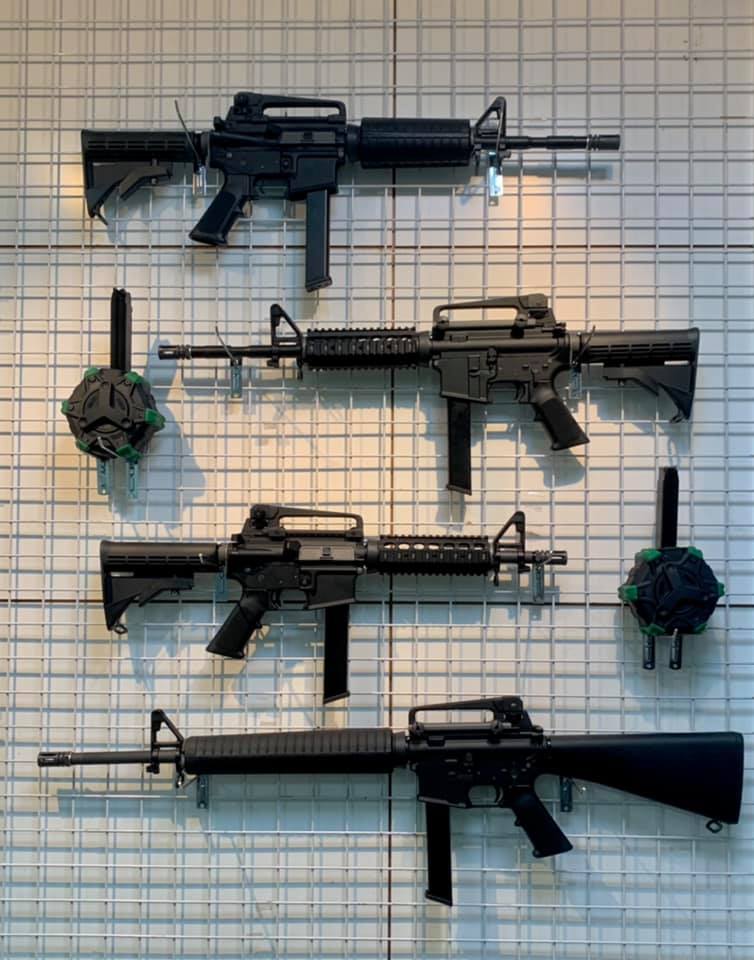 We’re kind of excited at Airsoft Action this morning after checking out the latest “in development” pictures and videos that WE Airsoft sent over to us, and have subsequently posted on their social media channels, as they show a number of “Pistol Calibre Carbine and Rifle” GBB models being tested!

With the popularity of “PDW” AEGs and GBBs out there at the moment it’s worth taking a moment to reflect on the fact that Colt released a carbine model for military and Law Enforcement users back around 1982, the Model 635; current Colt production models are the R0635 which features a Safe/Semi/Full Auto selective fire trigger group and the R0639 which has Safe/Semi/3-round Burst selective fire trigger group. Both are equipped with a 10.5 inch length barrel. Colt also produced the 633, which was a cool-looking modified compact version with a 7 inch barrel, hydraulic buffer and simplified front sight post used that was used by the DEA.

The Colt 9mm Submachine Gun (SMG) is a perfect platform for military and Law Enforcement users requiring a lightweight, compact, highly concealable, select fire weapon system for close quarters. The current RO635 is manufactured with a modular rail system that allows the easy mounting of accessory devices, fires from a closed bolt, is equipped with a collapsible buttstock, and is easily field stripped without the need of any special tools.

As the Model 635 has been used by U.S. Marine Corps, the U.S. Marshals Service, Los Angeles Police Department SWAT, U.S. Dept of Justice-Federal Bureau of Prisons, U.S. Diplomatic Security Service (DSS), United States Department of Energy, for protection of nuclear weapons and facilities, and a number of other federal agencies there will e aa whole heap of interesting loadout opportunities to look at too!

WE have told us that there will be more information available soon, and of course we’ll share that as soon as we have it, but for now we will dream dreams of getting our hands on something that we can transform into an “old skool” Model 635 GBB…

SILVERBACK TAC-41-P NOW IN AT LWA!