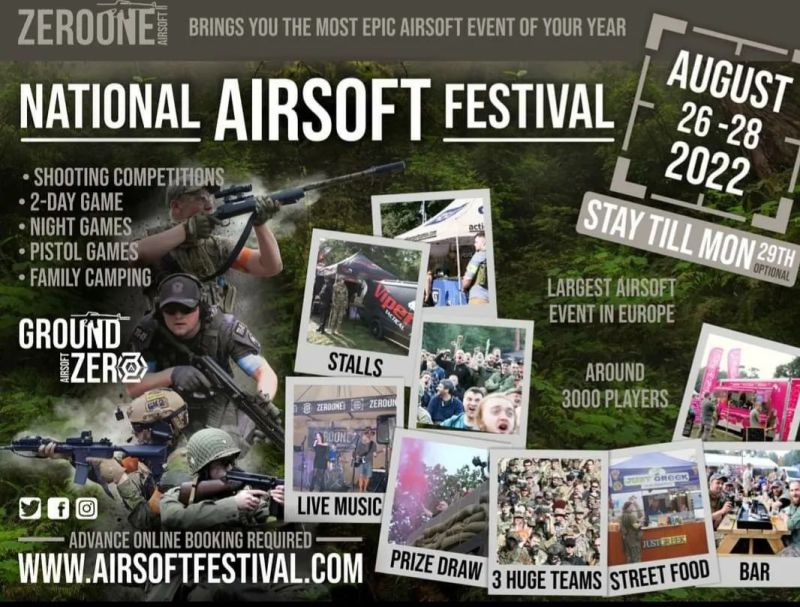 It’s a bit of an early finish for us this week as a bunch of the AA Crew are are heading off early tomorrow to the UK NATIONAL AIRSOFT FESTIVAL!

With a FULLY BOOKED EVENT again this year we’ll be there playing and reporting, and we’re seeing on the NAF website that they’ve got 3052 PLAYERS booked in, spread with 1018 on BRAVO, 976 on DELTA, and 1058 for THE OTHERS so it looks like it’s shaping up to be a monster of a weekend!

For those that are still oblivious to the event the UK National Airsoft Festival (formerly the National Airsoft Event) takes place every August Bank Holiday down at the Ground Zero site in the depths of the New Forest. The NAF/NAE has been running since 2007, when Ground Zero/Zero One made history by hosting what was at that time the largest airsoft event ever held in in the UK (and probably still is!), bringing in players from all over the UK and Europe!

The site is superb and the organisation impeccable, and this year the numbers are WAY back up there! The facilities on site are first rate, the scheduling is spot-on, and gameplay is utterly diverse so whatever your style of airsoft may be the National Airsoft Festival has something to offer you. The Festival is first and foremost just that, a joyful festival event that celebrates airsoft in all its diverse and wonderful forms, and a festival that just happens to be set on an awesome site that has a HUGE game going on at the same time!

We’ll be back as usual on Monday, but for now we’ll end this week with a shout out to all of our friends, both players and those from the industry attending the NAF…