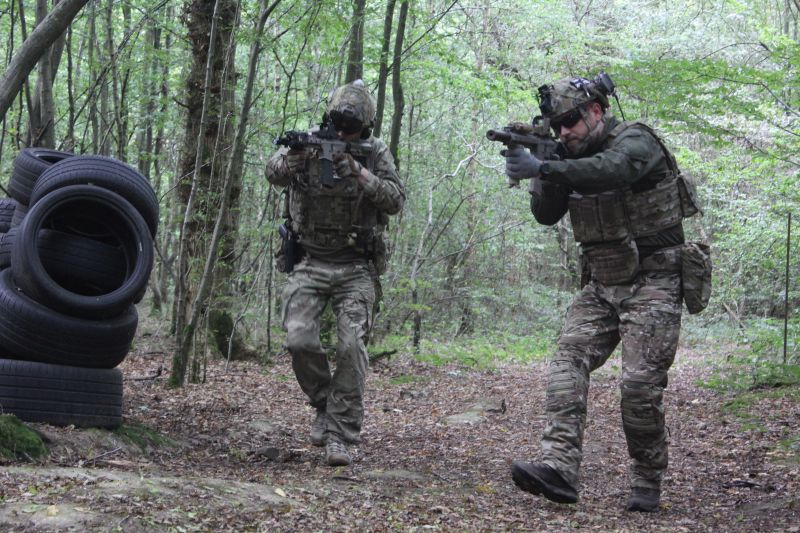 Another weekend spotted and as always the AA Crew have a lot planned… what about YOU?

It’s a right mixed bag again as the members of Red Cell and The Legion are busy in their own countries, and whilst some are still on “downtime”, others are right on out there getting their game or shoot on!

We’ve got some special plans for the June Issue (Issue 139) which has meant some additional range-testing time, and when Bill visited iWholesales earlier this to see what was new with them week he got “first hands on” and picked up some very, very special RIFs to help with next months theme! So for him, it’s most definitely rangetime, and without giving anything away he told us that “I picked up a bunch of stuff on Wednesday so I’m hoping for good weather so I can check out those “specials” along with the new RAPAX AR, RAVEN R14 and Cybergun Canik pistol on the woods range… and that Krytac P90… if THAT impresses me it will be the first ever P90 to do so!”

Other range plans are in place for Boycie, and he says that he’ll also be “working on a couple of custom builds for a friend”, and even Little Stu is back in the workshop as “I’m hoping to work on my WE GBB MP5’s as hop rubber/inner barrel combo’s need looking over”.

It’s a big weekend for Miguel and his fellow GHOSTs in Portugal as “it’s time for our birthday game! Around 70 players will be present in our field called “Carentan”, for our game called “14” . The rules are set and the objectives are made. All that’s left is to enjoy an airsoft game followed by a BBQ!” All of us at AAHQ wish all the players attending the very best for a fabulous game, and of course we’ll bring you the AAR at a later date!

Sticking with games, Stewbacca is out and about as usual in Taiwan (if the day has a Y in it, he’ll be doing something airsoft related for sure!) and he tells us that “We’re planning to go to the incinerator in Taoyuan again; the last few weekends have pushed us inside and resulted in change around last minute due to poor weather so we’re planning for it this time. My PP2000 rig setup last weekend worked really well so I might try that again along with my new custom placard style interchangeable mag pouch setups. Will probably field my Thompson M1A1 and C96/712 for “reasons” too…”

Dan in the USA reported in to say that it’s “airsofting for me this weekend! Which also means delivering a trunk load of repairs to their respective owners. I look forward to clearing out the space more than I do the game, sometimes lol. I’m hoping to have the rest of my mags for the VFC MP7 project modified and whipped out before the weekend so I can properly run it on the field and give it its first trail by fire. It’s slow going…” whilst our newest Legionnaire Larri will be hitting the field in Hong Kong as he “will go for CQB; an old friend that I haven’t seen for 13 years is going to bring his son for his first airsoft experience!”

The pace is most definitely picking up again at the moment, and with so many of our industry friends pledging their continued support for Airsoft Action and sending us some fabulous new AEGs, GBBs, and gear to check out you can be sure that each and every future issue of the “monthly” is going to be chock-full of airsoft goodness, and of course we’ll update news through the week here on the website and via our social media channels too!

The weekend is comin’ right at ya, so we’ll sign off as usual by saying Play hard, Play safe, and above all Play with Honour!