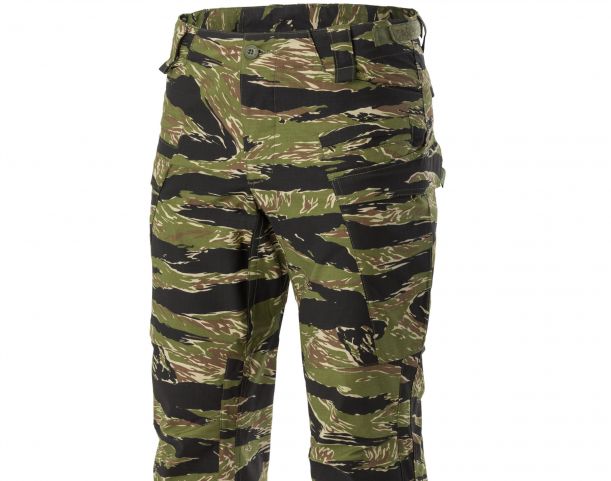 Our friends over at Helikon-Tex in Poland have been teasing us for a little while that they will have a “new” camo pattern joining their extensive range, and finally they’ve let us know the details, and we’re overjoyed to see classic “Tigerstripe” appearing on a couple of models of clothing to get the ball rolling!

Most people will have an immediate connection with the family of Tigerstripe patterns due to its usage by Special Forces, SEALs, the ASAS, NZSAS, and the Ranger Recon teams in Vietnam, but in actual fact it was already in military usage WAY before the Americans got involved with it. The Vietnamese Marine Corps were already playing with the “VMX Experimental” pattern in the late 1950’s which is thought to have had a relationship with the French Indochina “Lizard” pattern, using as it did a virtually identical stripe configuration. The “VMX” in turn was developed into the first “official” Tigerstripe pattern, the Vietnamese Marine Corps Sparse or “VMS” which was issue from mid 1959 onwards!

But as much as “Tiger” is a much-loved and revered historical pattern, it’s also one that is more than valid in the right environments today, and if we’re honest it’s a pattern that we dearly love! Whilst the styles will not be suitable for re-enactment use to us that’s not really the point, as the two models that Helikon-Tex have launched are the URBAN TACTICAL SHORTS and the URBAN TACTICAL PANTS, clothing designs that we’ve looked at before and rated very highly!

What makes Urban Tactical Pants and shorts so special? The cut and pockets layout employed in these pants maintain civilian enough to wear every day, while retaining full functionality of combat pants, capable of supporting tactical essentials. Elastic Velcro-closed belt allows easy adjustment. Wide belt loops allow as wide as 50 mm belt, including all HTX tactical belts: EDC, UTL® or Cobras®. Due to the clever layout of the pockets, equipment can be placed close to your centre mass, around the hips and waist. Front and rear pockets edges are reinforced to withstand constant use of light or knife clips. Two Velcro-closed front pockets are big enough to carry a smartphone – or even an AR/AK rifle magazine! The thigh pockets look flat, but thoughtful design allows pouches or wallets to be carried with ease. Bespoke internal pockets on the trousers allow fitting of Low Profile Protective Pads® if you need them.

These are two very popular garments to get things started, and we sincerely hope that we’ll see more coming in this pattern from Helikon-Tex, as it looks like they are most definitely giving an old tiger some sharp new teeth!