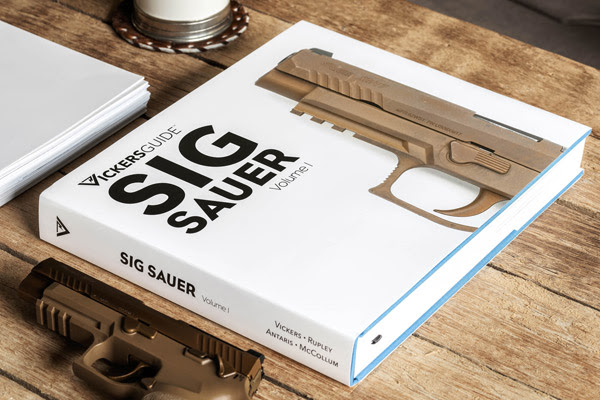 Just in time for Christmas, here’s a little something that any Gun Bunny would LOVE to find under their tree!

Vickers Guide: SIG SAUER (Volume 1) highlights over 95 pistols and 15 submachine guns from Europe, America, and private collections across the globe, including the Swiss P75 service pistol, X-SERIES pistols, the early SIG submachine gun, the Modell 1930, the initial MPX prototypes, and an in-depth look at the evolution of the P320, ultimately evolving to become the M17 – the official handgun of the U.S. Military.

“The Vickers Guide is a one-of-a-kind masterpiece that chronicles SIG’s history beginning with our German and Swiss roots, to the premier American firearms manufacturer we’ve become today,” said Tom Taylor, Chief Marketing Officer and Executive Vice President, Commercial Sales, SIG SAUER, Inc. “The content of volume one takes the reader on a historical journey of SIG SAUER through the development and modernization of our most iconic firearms, and the quality and insight that the Vickers Guide is known for and makes this book a must-have for every SIG, and firearms enthusiast alike.”

Vickers Guide: SIG SAUER (Volume 2), highlighting rifles, machine guns, and other special purpose weapons and will be released in 2021!