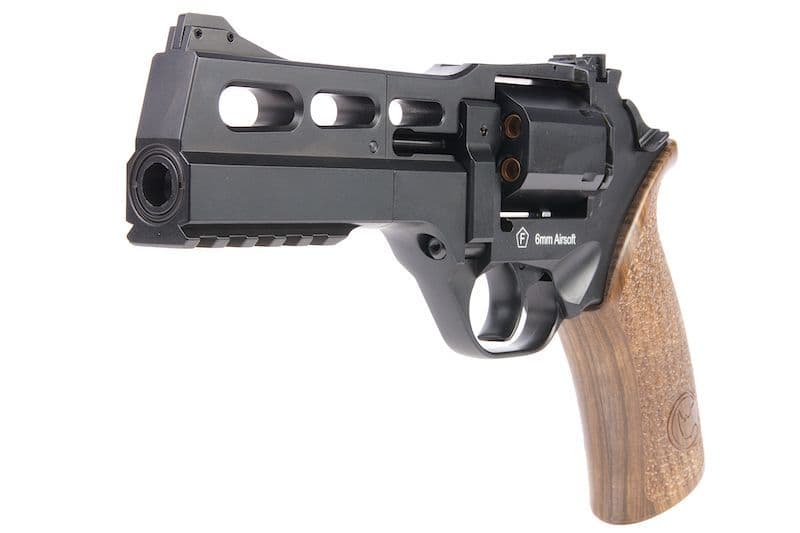 We’ve finally got our hands on a test sample of the mighty Chiappa Rhino wheelgun thanks to the guys at iWholesales, and oh boy, is this revolver fun or WHAT???

Beloved of real-world shooters and movie-makers around the world for it’s innovative features and stunning, unique looks, the fully licenced Rhino revolver has been selling like hotcakes if what we hear from retailers is even halfway right!

The Chiappa Rhino is a revolver that has been turning heads since it arrived on the shooting scene in 2008, and Chiappa themselves tell us that “the Rhino is the most innovative development in revolver technology in decades, if not since the creation of the revolver itself. Refusing to be constrained by tradition and previous design limitations, the Rhino has improvements that move the revolver forward into the 21st century.”

In the “real deal” this also helps with recoil mitigation as the barrel sits much lower, making the transfer of rearward force straight back into the arm of the shooter. This design also allows the pistol to have a beaver tail at the rear of the grip, allowing the shooter to have a relatively high purchase on the gun.

The airsoft version which has been designed in conjunction with BO Manufacture is a faithful replica of the real steel firearm and features a full metal frame, wood (plastic grips), and full “under licence” markings. Being Co2 driven you will be able to operate the Rhino in a variety of environments (even on cold, icy winter mornings!) and it will offer consistent power delivery, and thus far we’ve found it to be very pleasing to shoot… of course we’ve only just started our testing, so stay tuned for more as we put this super revolver through its paces!