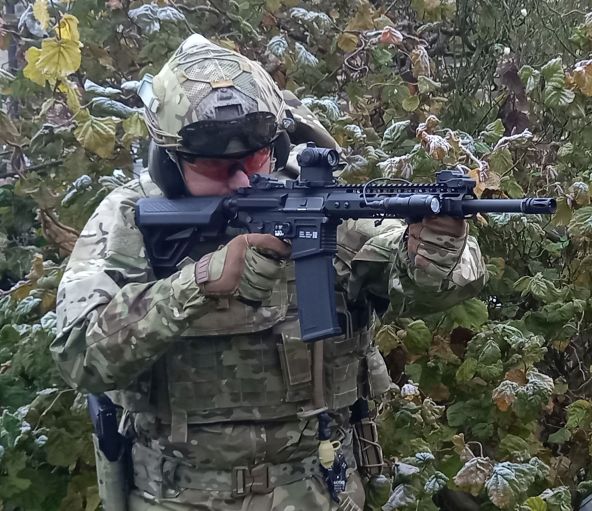 As we rack up another week at AAHQ we’re getting quietly excited as this weekend our Christmas decorations will be going up, and as we’ve been invited to a number of airsoft get-togethers we’re beginning to feel quite festive!

Snow is also forecast where we are, so it’s going to start to feel a lot like Christmas!

Of course next week we’ll be uploading the Christmas Issue of AA, the last of 2022, and as usual it’s going to be a cracker with lots for you to get your teeth into over the holiday season; all the articles and content are in and edited, with just the final touches to put to it… c’mon, you can’t have a Christmas feast without all the trimmings, now can you?

But this weekend is also a busy one as members of the AA Crew are out doing their thing, many of them at final and celebratory “Last Games of 22” which always makes them a bit special… and usually involves players dressed up as Santa and his elves… whatever the theme, we hope you’ll enjoy YOUR game as much as we enjoy ours!

Touching base with some of The AA Legion and Bjorn kicked things off by telling us that “I will probably attend some games over at my old home field Tjärnan. But I also have some gear setup to do. Testing new organizer panels for the car from Onetigris, a couple of vests, pouches n a couple of helmets. Photoshoot coming up!” whilst Miguel reported that “now that we are done with our admission course, it’s time to get back in action. We are going to one of our fields to do some basic exercises and let the new guys try some of our gear!”

Rather cryptically Jimmy simply posted an image of a MANCRAFT PDiK V3 in our chat group, so we’re guessing that something is cooking in the “skunkworx”! Bill is out doing the final range-session with the latest EDGE 2.0 AEGs from SPECNA ARMS (SA-E09 EDGE 2 pictured) and says “it’s getting mighty, mighty cold on the range right now; this morning was properly crunchy-frosty and it was GREAT! I love this time of year when you can get out to shoot and if your gear is right REALLY make the most of the day still… who knows, my Sunday session could be in snow… here’s hoping!”

Stewbacca is out to shoot as always and told us that “The weather has finally turned “cool(er)” in Taiwan as our equivalent of “winter” has arrived. So team TaiJi is heading indoors once again to Linkou CQB Club to do some urban warfare; I’ll be running my shortened competition set up VFC FAL/LAR with clone SRO to test it out at longer ranges before the Kaohsiung Level 3 competition the weekend after. Might even run my Shadow 2 to try it out on meat targets as an offensive handgun instead of just on paper and poppers…”

Something exciting is on the way for 2023 for Red Cell to look forward to as we hope to have a new permanent range-home next year! Bill W-R has been doing all the groundwork on this with his friends and reported “I have a final meeting with my fellow directors and a site visit to plan for Hellfire Corner Airsoft grand opening in the new year” so things are looking mighty fine in our book, and we’re very much looking forward to a new range locally in January although we understand that the site proper is looking to open in March… more to come on this soon!

And although many of us are enjoying the season, spare a thought for those with kids as Dan told us that “it looks like I’ll be playing Nurse Ratchet this weekend. The boys have a fresh new plague, so… tis’ the season lol!” We wish the boys, and anyone else feeling under the weather get well soon and a speedy recovery!

So, to all of you out there we’ll bid you “GAME ON” for another week, and as always we’ll sign off by saying Play hard, Play safe, and above all Play with Honour!