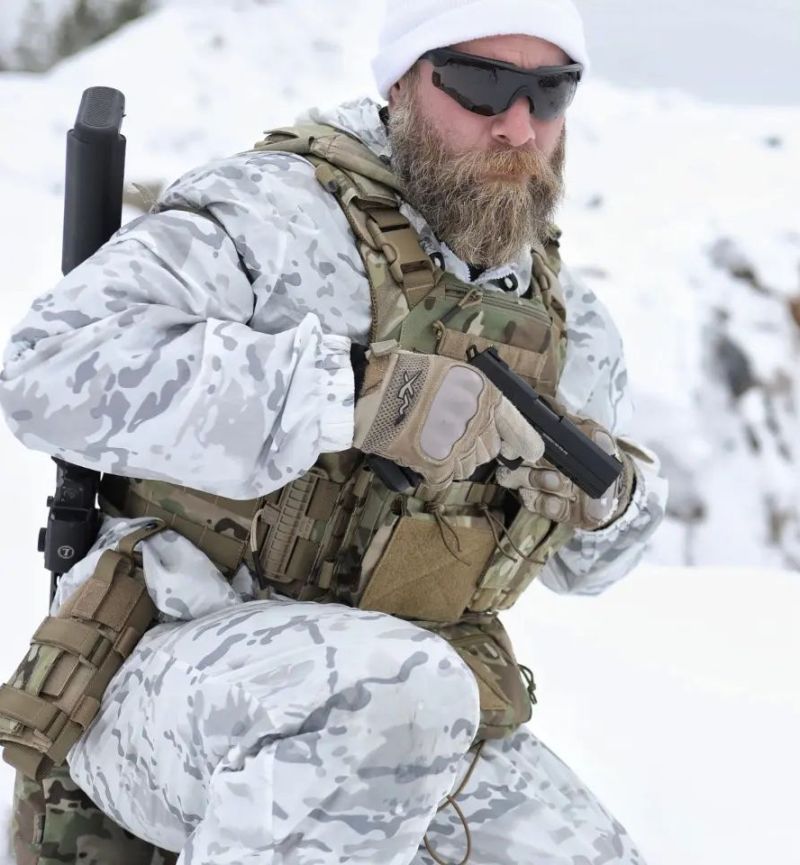 Well the AA Crew are back to their usual shenanigans this week as they prepare for shows,events, and games ahead!

2023 has most certainly started well, so AA Legionnaire and our very own resident “Airsoft Viking” Bjorn has been braving the elements during one of his seasonal “snow shoots”; the pictures already coming from this look downright awesome, and he went on to tell us that “I will try continue shoot some pics and videos for ONETIGRIS this weekend if the weather allows it!”

However, things are a little less adventurous for the majority of the team as we get very much back to business as usual, and at AAHQ Bill “will be pulling the team gear pile together in readiness for the end of the month. We’ve been asked to get involved in a major product launch that needs a big photoshoot doing, so our gear needs to be on point for this! I’ve had some new gear in especially for this exciting event, and we’ll be giving the full lowdown in the February Issue!”

Jimmy says “I’ve got a busy weekend ahead of me with several rifles to finish off; I have a Warhawk that just refuses to work properly regardless of what I do to it so that may end up in the bin or just as an expensive paper weight! I shall be going live Saturday afternoon on my “All Things Airsoft” personal FB page, doing a start-to-finish HPA build for another player; lots of lovely parts going inside that, so.for anyone interested you can find me there…”

Larri tells us that “I’m counting down to Lunar New Year here in Hong Kong, but still have two more Friday games; this week will be some more CQB action with some more new new players joining!” And talking of new players Miguel reported that “it’s time for some training with the new guys! We will be hitting one of our fields for some practice, followed by a big lunch with the gang!”

Stewbacca is also affected by the changing years as he told us “for once I probably won’t be shooting on Sunday as Saturday after work is our team “Weiya” Chinese New Year’s party again, and given that we practically had to carry our former USmil team leader home last year after voting him into headshed position I’m not expecting an early start this Sunday!” Play hard, play hard, right?

And of course Boycie, Li’l Stu and Dan are all going to be wending their way to VEGAS FOR SHOT SHOW! Dan jumped into our end-of-week chat to tell us that he is “mainly aiming to try and slam out a few builds before taking off for Vegas so I’m not too far behind when I return! I’ve got to get another custom KWA built and ready to head over to Norway, then jump back inside the gearbox and do a little short-stroking to finish up a Krytac LVOA. There’s also a King Arms SIG 556 that I’ve been on-and-off-again hammering on because it’s been an absolute gremlin… and if there’s time, maybe tinker a bit with modifying an RMR optics plate to fix my broken RWA Agency NOC slide…”

Boycie will be heading up our coverage at SHOT and said that “I’ll be heading to Vegas baby, with Li’l Stu and main man Dan! I’m very much looking forward to meeting up with Marck and lots of other airsoft friends at SHOT, and to flying the Airsoft Action flag in the USA again; first time for me, but not of course for Airsoft Action!”

So, not so “business as usual” really after all, and we’re psyched about sharing updates from SHOT SHOW next week! But of course on Sunday our FIRST ISSUE OF 2023 will be dropping, so we hope you’ll tune in to that when you have some time! For now though, we’ll sign off the week by saying as always Play hard, Play safe, and above all Play with Honour!